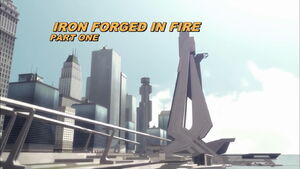 I've got to do this Rhodey. For my dad. I couldn't save him, but I can stop Stane. I can save everything my dad built.

Teen genius Tony Stark has just finished his greatest invention: the Iron Man armor. But before he gets to show his dad, Tony's world is shattered. Inventor Howard Stark dies in a plane crash while investigating an ancient Chinese “Makluan ring”. His son, Tony Stark, barely survives the crash when the armored exo-suit which Tony designed and built himself implants in his chest a device to sustain his damaged heart. Obadiah Stane takes control of Howard’s company, Stark International, and begins weaponizing Stark’s inventions. Tony moves in with family friend James Rhodes and his parents, and begins attending school. There, he meets classmate Pepper Potts who informs Tony that Stane is under investigation by the FBI for possible involvement in Howard’s death. When Tony goes to investigate in his armored suit, he ends up preventing a runaway train from crashing into Stark Tower; the media calls him Iron Man. A shadowy figure called the Mandarin, wearing a second Makluan ring, vows to obtain the ring now in Stane’s possession.

Retrieved from "https://marvel.fandom.com/wiki/Iron_Man:_Armored_Adventures_Season_1_1?oldid=5737083"
Community content is available under CC-BY-SA unless otherwise noted.