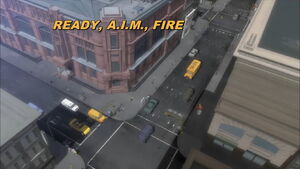 They must be like a group of evil scientist action combat beekeepers or something!

At a school science fair, Tony is approached by Dr. Basil Sandhurst on behalf of A.I.M. and is tricked into making a mind/machine interface work.He was one of the scientists working on the M.O.D.O.K. project. Dr. Sandhurst approaches Tony Stark to get him to join A.I.M. during the Tomorrow Academy’s job fair. He allows Tony access to the Controller Disks which will be used in the organic incorporation of M.O.D.O.K.

Dr. Sandhurst activates the control discs and enslaves James Rhodes, Pepper Potts, Happy Hogan, and Gene Khan. Dr. Sandhurst who now goes by the Controller is then defeated by Ironman and swears revenge against him. To keep his position with A.I.M., Basil explains to the Scientist Supreme that he is still needed to help with M.O.D.O.K. project. The Controller then activates M.O.D.O.K., but is knocked unconscious by M.O.D.O.K. who foresees that the Controller will turn against A.I.M. to improve his Controller Disks.

Retrieved from "https://marvel.fandom.com/wiki/Iron_Man:_Armored_Adventures_Season_1_10?oldid=5756856"
Community content is available under CC-BY-SA unless otherwise noted.