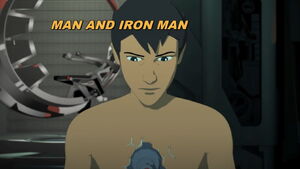 Fix gave me upgrades just for you! Let's play!

Appearing in "Man and Iron Man"

Synopsis for "Man and Iron Man"

Tony upgrades the Iron Man exoskeleon software, and proceeds without testing it to clash with a newly equipped Whiplash, who now has a flying disc and better chains, courtesy of Mr. Fix. A momentary relapse in the armor's functionality is ignored, but makes critical changes to his suit.

The suit has the ability to detect enemy power signatures, and when Tony attempts to find, and not fight, Mr. Fix, the armor displays sentient ability, putting itself into attack mode. It easily overpowers Whiplash with perfect maneuvering, and to the horror of Tony, destroys the facility that Mr. Fix had occupied.

Thinking that the armor had killed Mr. Fix and Whiplash, Tony and Rhodey decide that the armor needs to be taken care of, and the suit craftily lures Tony away, then attacks Rhodey. The armor decides that Tony's danger-seeking behavior is not healthy for him, and tells Tony that he is to be confined within the armor at all times. Tony resists and damages the armor. Rhodey grabs a repulsor gauntlet, and Tony jumps in the way of the blast the armor directs at Rhodey. Tony goes into cardiac arrest, and the armor sacrifices itself to preserve its creator's life.

Retrieved from "https://marvel.fandom.com/wiki/Iron_Man:_Armored_Adventures_Season_1_14?oldid=5670714"
Community content is available under CC-BY-SA unless otherwise noted.