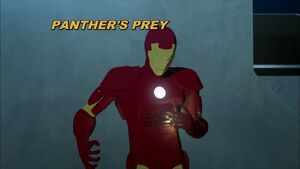 You will face Wakandan justice!

T'Challa, son of T'Chaka, came to America to study. A few weeks ago, there was an attempted invasion of Wakanda led by Moses Magnum. Its king, T'Chaka was killed by a group of mercenaries and Magnum stole a piece of vibranium. T'Challa was named the new king of Wakanda and he has the duty of retrieving the vibranium and bringing Magnum to Wakandan justice.

The Panther has been tracking Magnum for weeks and learns that he plans to sell the vibranium piece to A.I.M. It wasn't long before he meets Iron Man and discovers his true identity. The Panther tells Iron Man not to interfere in Wakandan matters or he will tell the world of his secret. At the bridge, the Black Panther confrots Magnum, but his AIM agents blast his suit with so much vibrational energy that it will turn him into a living bomb. Iron Man arrives and tells him he can release it by hitting something. Iron Man and the Black Panther defeat the rest of the soldiers and Moses Magnum. His vibranium suit is now stabilized. Iron Man offers him the vibranium piece back and tells him that he doesn't have to go through this alone. The Panther takes the vibranium and thinks about changing Wakanda's attitude about outsiders and he leaves with Magnum.

Retrieved from "https://marvel.fandom.com/wiki/Iron_Man:_Armored_Adventures_Season_1_15?oldid=5710056"
Community content is available under CC-BY-SA unless otherwise noted.