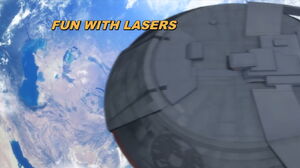 Stay out of this Iron Man! I have everything under control!

Appearing in "Fun With Lasers"

Synopsis for "Fun With Lasers"

Arthur Parks, the Living Laser, wakes up inside the SHIELD Orbital Station, which gives him the ability to "fire" himself at targets of his choice. He takes the world hostage demanding Iron Man. But Nick Fury and SHIELD have something to say about that. When Iron Man tries to stop him, he runs into Nick Fury and SHIELD who inform Iron Man not to get involved. Iron Man flies to the station to fight the Laser, but Fury gives him a 20-minute window in which to diffuse the situation before he sets a self-destruct in the station off in order to prevent the Living laser from destroying New York. Iron Man eventually tricks the Laser into capturing himself and S.H.I.E.L.D. takes him into custody, with Fury threatening to destroy Iron Man if he ever does more harm than good.

Retrieved from "https://marvel.fandom.com/wiki/Iron_Man:_Armored_Adventures_Season_1_16?oldid=5710089"
Community content is available under CC-BY-SA unless otherwise noted.