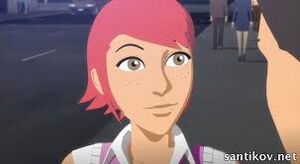 Tell the Tong the Mandarin will deal with the Maggia!

Pepper realizes if she wants to keep Tony as a friend, she has to learn to start liking Gene Khan, who has busy trying to negotiate peace as the Mandarin between his Tong forces and the Maggia. Pepper ends up in the middle of the conflict. In order save Pepper from Count Nefaria and the Black Knight, without revealing his secret, Gene calls Iron Man. When Iron Man interrupts the meeting, the Tong and the Maggia fight, leaving Iron Man against Black Knight. In the end, Gene saves Pepper, Count Nefaria and Black Knight got arrested and the Tong soldiers find out that the man they've been following is not the Mandarin.

Retrieved from "https://marvel.fandom.com/wiki/Iron_Man:_Armored_Adventures_Season_1_18?oldid=5213299"
Community content is available under CC-BY-SA unless otherwise noted.