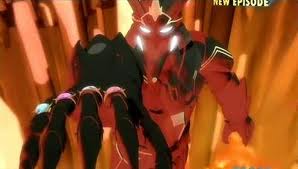 Appearing in "World On Fire"

Synopsis for "World On Fire"

The episode opens with Gene daydreaming about his childhood, and his mother telling him about his Mandarin heritage and how the rings will give him the power to do whatever he desires. Snapping out of it, he was telling Tony, Rhodey and Pepper what he read about the Mandarin legend in the first temple they visited. After he leaves, Pepper insists that they should tell him that Tony is Iron Man and let him on the team for real. Tony agrees to do so in order to get his help and confidence, as they've tracked down the next ring and aim to recover it. Gene is busy however, and misses their calls. The friends take off to the temple, located in the side of a volcano, but they are disappointed that Tony didn't wait for Gene. Inside, Pepper and Rhodey argue about triggering the next test, when inadvertently they do, and Rhodey is covered by a fiery form.

Meanwhile, Gene recalls more of the Mandarin legend - the Mandarin wished only for a worthy and virtuous heir to the Makluan Rings and devised tests spread in the four corners of the world - and a flashback shows the Mandarin creating the fiery test. Back in the temple, Rhodey soon attacks the others and Tony suits up. In panic, Pepper calls Gene but is disconnected before she can tell him their location, Gene calls Tony but has no more luck getting the information - he activates his rings and teleports. Rhodey's new powers grow and begin to activate the volcano - and spreading to activate other volcanoes around the globe. Pepper attempts to solve the puzzle herself, by moving coal rather than ice into the pillar of light, but only manages to transform herself into another fire being as she shouts; "Are you worthy?".

Gene again remembers his childhood and how his stepdad killed his mother for the first ring. He teleports into Rhodey's room, looking for clues to their whereabouts, as he searches the other buildings he is interrupted by Mrs Rhodes and hides. Rhodey returns to his normal form, and Iron Man flies him back to the temple - only to find the newly transformed Pepper. Tony's armor is wearing down from her punches, but he does not fight back in fear of hurting her. Rhodey calls Gene for help, and by his analysis both the ice and coal must be thrown into the light together. Pepper exclaims: "You are worthy!", returns to the light and becomes herself again.

Back in the garage, Tony asks Gene if he wants to try the ring on, but he resists the temptation. Tony puts it on but admits that though his analyses shows that it is powered on, he can't make much of it. Back home, Gene again recalls his mother telling him about the rings' powers to give him anything he desires.

Retrieved from "https://marvel.fandom.com/wiki/Iron_Man:_Armored_Adventures_Season_1_20?oldid=5526823"
Community content is available under CC-BY-SA unless otherwise noted.