"Designed Only for Chaos" 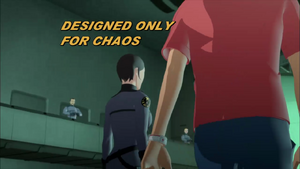 Episode Title
"Designed Only for Chaos"

Mental Organism Designed Only for Computing.

Appearing in "Designed Only for Chaos"

Synopsis for "Designed Only for Chaos"

The Living Laser is dying, and Tony Stark is trying to save his life. But fate has other plans. The Ghost has been hired by AIM to 'steal' the Laser. When the Ghost comes Tony realizes that it was AIM who hired the Ghost to kill him. AIM needs him to be a power source for their greatest creation, and when Iron Man arrives to rescue the Laser, he's too late. The Mental Organism Designed Only for Killing is online. Not even Iron Man can withstand MODOK's mental power and MODOK immediately brings Iron Man to his knees and takes information from him, including his secret identity. When the Living Laser hears MODOK said that Tony is Iron Man he realizes that Iron Man had been trying to help him the whole time. Then he joins the fight just as MODOK is about to finish Iron Man and working together the two overpower MODOK and cause his memory system to crash so he forgets all the information he took from Iron Man. But after battle it becomes too late to save the Laser, Iron Man thanks the redeemed Living Laser for saving him and then he disappears. Meanwhile Tony loses faith in his father after learning from Nick Fury that he made weapons for S.H.I.E.L.D. but Roberta Rhodes reveals that Howard gave up making weapons and started helping people when Tony was born just to become "someone his son could be proud of" which restores Tony's belief in his father.

Retrieved from "https://marvel.fandom.com/wiki/Iron_Man:_Armored_Adventures_Season_1_21?oldid=5213303"
Community content is available under CC-BY-SA unless otherwise noted.