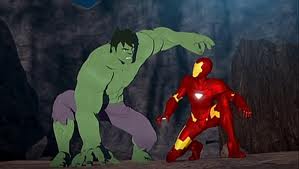 Rhodey finds Pepper sleeping on the school steps, overworked from schoolwork, team iron man research... a man (Rick Jones) bumps into her, but then the Hulk lands and chases after him. Soon the Hulk gets in a battle with A.I.M., but they flee the scene after Iron Man arrives in bulky power armor. The Hulk escapes again, Iron Man locates Rick, but he puts a controller disc on Tony. The armour defenses attempt to toast the disc, but Tony is now controlled. Pepper and Rhodey find the incapacitated Rick, but as they get inside the building, the Hulk bursts out. Rick stops him, saying Pepper and Rhodey are friends now. Iron Man arrives at a building top to meet the Controller, who was trying to control the Hulk, but finds Iron Man a much more useful target in his goal to destroy A.I.M.. He asks Tony to remove his helmet to show his identity to him.

Together they arrive at a school to attempt to locate Tony, and initiate the armor's lockdown procedures to prevent him from opening his helmet or saying anything - but the controller stops Rhodey from interfering anymore after that. The Controller orders Iron Man to attack A.I.M., and he does, smashing through Goons and taking on Modok. Modok's mental blasts prove useless against the controller disk, and the Controller arrives to gloat. Hulk and the gang shows up, and try to make Hulk break the controller disk on Iron Man's helmet. Eager to smash the annoying metal man, he prefers to do so by repeatedly smashing Iron Man's face into a wall, finally succeeding. In the chaos, the Controller manages to regain control of Rick who orders Hulk to bring the unconscious Iron Man over and rip off his helmet, despite Pepper's protests. Tony wakes up just in time, and shoots the Controller in order to release Rick. Rick defuses Hulks anger towards Iron Man and they finally take down the Controller together.

Rick and Hulk soon wish to leave the city, even if Pepper insists they can find rest there. She seems happy that despite her frustrations with Team Iron Man, Team Hulk would be way worse.

Retrieved from "https://marvel.fandom.com/wiki/Iron_Man:_Armored_Adventures_Season_1_23?oldid=5213307"
Community content is available under CC-BY-SA unless otherwise noted.