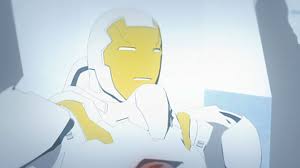 Blizzard one way or another you are going to help me save my daughter.

Whitney is in class, nervous, hallucinating about her father calling her useless. As Madam Masque disguised as an agent, she attacks her father, threatening him and accusing him, but she is overpowered and he discovers her identity. She passes out. The Mask appears to have deteriorated her brain wave patterns, and Obadiah Stane has no choice but to call for Tony to help reverse the damage. Delirious, Whitney accuses Stane of Howard Stark's death, making Tony conflicted. He chooses to help Whitney, however, and travels to the Arctic as Iron Man to obtain samples from a special ore his father was using for these inventions; it was not stable at the time, making technology like the Mask and the Living Laser's harness harmful to the users, but Tony has since managed to stabilize it - his heart is using that ore now.

Stane thaws the Blizzard and sends him to acquire ore samples too - and implants a bomb in his armor for leverage. Rhodey and Pepper suspect Stane is up to something, but while they worry, Whitney leaves her bed and grabs her Mask and a weapon. Iron Man arrives at the abandoned Arctic base but is quickly overpowered by Blizzard, who demonstrates that he has outsmarted Stane already - removing the bomb by freezing it until it shatters. Blizzard has discovered the importance of the ore and destroys it to make it impossible to heal Whitney.

As Madam Masque is causing chaos in Stark Tower, Blizzard returns to tell Stane what he has done. Soon Iron Man arrives, and Stane is revealed to be Madam Masque, then, knocking down Blizzard and scanning him, she takes his form. The Blizzards and Iron Man battle, until the real Stane arrives. Madam Masque moves to attack him, but he trash talks her - Iron Man disables him with a sonic burst. Pepper and Rhodey rush in as Tony reveals his identity to the delirious Whitney, who moves to attack all the same. He knocks her out, and decides that he will have to risk his life to save her with the ore from his heart implant. The process proves successful, and Whitney wakes up in the hospital bed with Tony and Obadiah watching over her. It seems she has forgotten everything that has happened since she first donned the mask, but she also confides in Tony that she doesn't want to spy on him as her dad has asked her to.

Retrieved from "https://marvel.fandom.com/wiki/Iron_Man:_Armored_Adventures_Season_1_24?oldid=5213308"
Community content is available under CC-BY-SA unless otherwise noted.