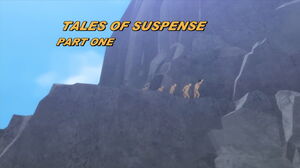 Appearing in "Tales of Suspense, Part 1"

Synopsis for "Tales of Suspense, Part 1"

Team Iron Man and Gene are at the library trying to make sense of the directions to the next Makluan rings, but Gene leaves, impatiently. Back home, the Tong ninjas have released Gene's stepdad after realizing they are following the wrong Mandarin. They overpower him and take back his three rings, moving on Tony for the fourth. 1000 years ago, a flashback showing the Mandarin creating another temple while south American Incas watch him in awe. Finished, he encases his temple in the rock, but one of the men etch the likeness of the Mandarin's helmet into the rock face for explorers to find. Back home, Pepper tries to discourage Tony from finding more rings, saying that it is dangerous and will only help the Mandarin. Rhodey finds his clue at the library (recognizing the etching) and calls Tony just as Tong ninjas attack them. They race for the armory, but they are captured by the Mandarin, Tony's ring is taken and the ninjas set fire to the storage buildings. Fire bursts into the armory, but the Iron Man armor is protected in its launch pod.

In the helicopter, the captured Gene wakes up and reveals that the Mandarin is his step-father, as Pepper suspected, but lies that he did not know until now. He acts on the verge of crying, but Pepper comforts him that he has friends. Tony is again about to reveal his identity to Gene, but they arrive at their destination in Peru. Rhodey enters the damaged armory, reviewing the surveillance tapes from the Tong attack he realizes what has happened. In the hidden Inca city, the Mandarin uses the rings to move the rocks aside, but declares he has no intention of taking the risk of the test himself. Holding Pepper hostage, he sends Tony and Gene to do the hard work. Inside the temple they arrive at the Test of Sacrifice, two pedestals with hand-shaped indents requiring two people to activate, and a large dragon statue inscribed as Fin Fang Foom.

Rhodey tries to get the Mk 1 armor, but the pod is stuck. The power cores of some of the other armors detonate, and he flees. Pepper threaten the ninjas that the dragons will eat them all, but the Mandarin tells her to be silent. Tony and Gene activate the two pedestals and the dragon comes to life. Rhodey finally dons the War Machine armor, busts out the Mk 1 armor and escapes the launch bay with it in tow. He makes for Peru by a high orbit to save time. Back in the temple, the Tong ninjas flee the dragon, even the Mandarin himself is scared. Attempting to drag his hostage along, she wrestles the glove and all four rings from him by getting him stuck in a closing door mechanism. She runs for it, and Gene shouts to give him the rings. Reaching escape velocity, Rhodey's suit gives out. Life support failing, he is dead in space...

Retrieved from "https://marvel.fandom.com/wiki/Iron_Man:_Armored_Adventures_Season_1_25?oldid=5786991"
Community content is available under CC-BY-SA unless otherwise noted.