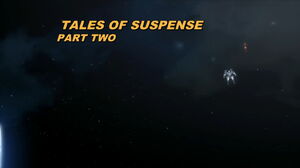 With all five rings my journey is complete!

Appearing in "Tales of Suspense, Part 2"

Synopsis for "Tales of Suspense, Part 2"

Tony, Pepper and Gene are in the Peruvian temple fighting Fin Fang Foom. As it is after the rings, Pepper hopes that by throwing the gauntlet into the dragon's mouth it will leave them alone, and she does so despite Gene's protests. As his suit is incapable of space travel because of the extreme cold, Rhodey realizes he has to use the space capable Mark I to boost him back down through the atmosphere and heat up from the friction. He succeeds and moves for the temple site, attacking the Tong helicopters - cutting off the Mandarin's escape from the shaking mountain. Tony, Gene and Pepper run in panic from the rampaging Fin Fang Foom while they try to figure out exactly what to "sacrifice" to pass the test. Tony runs for it to distract the dragon and save the others, and finally War Machine arrives to their rescue, throwing Tony's backpack to him. Gene is surprised to see Rhodey is Iron Man, but Tony says that he is, that's what he was trying to tell him on the plane. He suits up, and asks Rhodey to get Gene and Pepper out of there - but Fin Fang Foom just kicks him down.

Gene seems paralyzed by the idea of Tony being Iron Man, while Pepper tries to drag him to safety. Tony and Rhodey realize they are not getting anywhere with the fight, the dragon dives for Pepper, Gene sacrifices himself and pushes her out of the way as the dragon rams him through a door, creating a tunnel to outside. Gene himself appears to be thrown into a dark room inside the dragon, where he finds the Mandarin's gauntlet and a block of ice containing the final ring. Realizing he has passed the test, he finally has all the rings and defeats the dragon from inside, turning it to ice. The friends are relieved to see Gene walk unharmed out of the frozen dragon, but he transforms into the Mandarin and attacks them. Smashing Rhodey into a wall, he grapples with Tony and reveals that it was he who attacked Tony and Howard's plane.

A damaged Rhodey attacks, the Mandarin moves on him despite Pepper's begging him to stop, Tony again grapples with him. Despite his armor integrity failing, he actually proves stronger than the Mandarin's will, and Gene finally distracts him by claiming that he has his father hidden away, that he never killed him in the first place. The Mandarin escapes. Tony wakes up in his own bed, Rhodey having rescued them all. Tony knows that to get to his dead, he must go through Gene. Gene is seen back at the temple, torn between the emotional bonds with his new friends and his desire for his destiny. In frustration that with all five rings he still feels that he is nothing, he throws them to the ground and they reveal a map of five more... there were ten rings in all!

Retrieved from "https://marvel.fandom.com/wiki/Iron_Man:_Armored_Adventures_Season_1_26?oldid=5670745"
Community content is available under CC-BY-SA unless otherwise noted.