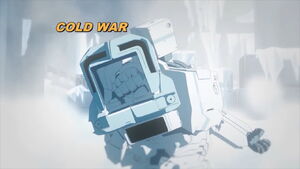 Well in that case, I've only got one question for you. How can I help?

Tony is becoming obsessed about getting Obadiah Stane. As Iron Man, he finds help in Blizzard, a former cryogenics expert named Donnie Gill who become deformed and destroyed after Obadiah Stane caused an "accident" there. Rhodes suspects that Blizzard is evil, especially after he and Iron Man start collecting parts to what he calls a weapon. He fights with Tony over the issue, and Rhodey claims that Tony has to do it without him, and leaves. As Iron Man and Blizzard finish getting their parts for the weapon, Tony/Iron Man realizes that he is willing to hurt innocents to get what he wants and they both fight, but Iron Man manages to get away safely, while Blizzard goes after Obadiah. After some modifications to his armor, and a apology to Rhodes, Tony becomes Iron Man and goes to save Obadiah from Blizzard's attack. Iron Man tackles Blizzard just before he freezes Obadiah and they fight, resulting in a massive blizzard/storm caused by Blizzard. Luckily, Iron Man stops the storm, resulting in Blizzard being croygenically frozen, while some threats by Obadiah causes Iron Man to tell Obadiah that "your time is coming". Back at Tony's lab, Tony suggests that he should build some arctic armor, as well as some space armor.

Retrieved from "https://marvel.fandom.com/wiki/Iron_Man:_Armored_Adventures_Season_1_4?oldid=5786978"
Community content is available under CC-BY-SA unless otherwise noted.