"Iron Man vs. The Crimson Dynamo" 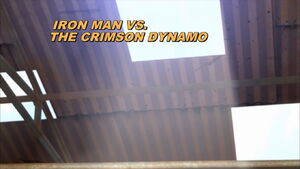 Harchov! You took him from me! You left me out there!

Appearing in "Iron Man vs. The Crimson Dynamo"

Synopsis for "Iron Man vs. The Crimson Dynamo"

Two years ago, an astronaut named Ivan Vanko was lost in space while observing the sun. Two minutes ago, he crashed down in the middle of New York City. Vanko was alive thanks to the massive environmental suit he was wearing dubbed the Crimson Dynamo (it was designed to survive the harshest conditions imaginable). But after years in space, all Vanko wants is revenge for the people who left him behind... Project Pegasus. Iron Man is having a hard time trying to fight the tough suit and decides to use brains over brawn.Even after that,Iron Man is just getting toyed with Crimson Dynamo.With no options left,Tony flew all the way to Project Pegasus slightly before Dynamo.There he meets Harchov,and learns the Dynamo's schematics. To.To his shock,Ivan was able to survive through ANYTHING,even anything his armors could dish out.Easily making through the security,Vanko was finally there.Holding him off at Max power for awhile, Iron Man was killing himself with the extreme power of the Crimson Dynamo against him weakened and unprepared. But as he ran low on power, Pepper is able to locate Vanko's family and resolve the matter peacefully.

Retrieved from "https://marvel.fandom.com/wiki/Iron_Man:_Armored_Adventures_Season_1_6?oldid=5786980"
Community content is available under CC-BY-SA unless otherwise noted.