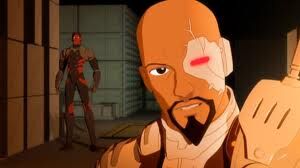 So you keep saying Stark. But if you don't help me on this quest, you will never see your son again.

Tony's been away to China for some weeks to search for clues to the whereabouts of the Mandarin or his dad. Meanwhile, Rhodey tries to keep the local crime down as War Machine, but he is still handling it a bit clumsily. The friends are still shocked and emotionally confused over how Gene has been playing them. Elsewhere, Gene is climbing a snowy mountain with Howard Stark in tow, threatening him to help him or he will never see his son again. Howard is worried that bringing all the rings together might have disastrous results. Tony has decided to relocate his armory in the Jersey Makluan temple, as its creepy air tends to keep curious people out. Pepper uses the upgraded armory's sattellite links to watch TV, and drool over Justin Hammer, the new young handsome millionaire in town.

Later that week, the friends arrive to a Tony who has been working on a new secret project for two days straight, without showering or shaving. Pepper exclaims that he would look terrible with a goatee. On TV they see Hammer arriving at the Stark International building, and Tony suits up to go spy on them. Obadiah Stane turns down Hammer's offer to buy Stark International to make it part of the Hammer Multinational weapons manufacturing business, so he quickly leaves again only to be attacked by Whiplash who has been hired to abduct him. Iron Man thwarts the attempt, and Justin Hammer tries to buy him.

Back in school, Happy and Whitney welcome him back. Tony has donated to the school as part of making them forgive his absence, and his science teacher is thrilled for the new miniature particle accelerator ... if only Tony would show him how it worked. Mister Fix threatens to scrap Whiplash for his failures, but receiving a new order from their client, he sends him on a mission to get Stane. Iron Man and War Machine arrive to stop him, but Iron Man is defeated by Whiplash's exploding whip segments. Unable to eject from the armor, he is detonated with it. Rhodey rushes him to the hospital - his heart implant is damaged and he will need the help of dr Yinsen.

On the mountain, Howard feels something has happened to his son, but the Mandarin denies it; Tony is tough. Rhodey and Pepper fret over Tony in the hospital, saying that it's even his birthday. He flatlines...

Retrieved from "https://marvel.fandom.com/wiki/Iron_Man:_Armored_Adventures_Season_2_1?oldid=5618427"
Community content is available under CC-BY-SA unless otherwise noted.