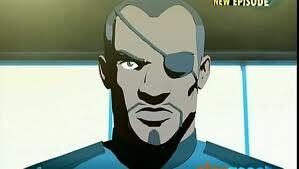 Live to scheme another day.

At the new armory, Pepper is snooping in on secure S.H.I.E.L.D. radio frequencies again. She intercepts what sounds like distress from the Helicarrier, and Tony launches to investigate. He spots Black Widow emerging from the Helicarrier and knocks her out of the sky, and chases her over the rooftops. She escapes as Maria Hill and the SHIELD agents stop Iron Man! Fury is not impressed with armored vigilantes doing his job for him, and he finds it suspicious that Iron Man was so quick on the scene. Fury explains they are purchasing Vibranium for a Vibranium-Adamantium project, and is humiliating to admit they may need Iron Man's help. Tony is not thrilled. As Hill escorts him out of the Helicarrier, his scanners pick up stolen Stark armor tech, he breaks free and enters a storage where he finds many S.H.I.E.L.D. battle armors based on from his own designs. Down on the roof tops, Natasha runs for her rendezvous - and proves to be working for Hammer this time! She detects something off at the Hammer building, and Ghost attacks there, neutralizing four guards and enraging Justin Hammer who is curious as to why Ghost is spying on him now. Upon assessing the risk, Black Widow and Hammer (codenamed High Roller in their radio chats) decide to wait until the morning with rendezvouz.

Aboard the Helicarrier, Fury plainly informs that S.H.I.E.L.D. bought the Iron Man armored drones from Hammer, "all nice and legal". Tony is enraged, and leaves, deciding to leave S.H.I.E.L.D. to recover their alloy themselves. Hill informs Fury that scanners have picked up signatures of the vibranium-adamantium alloy on Iron Man. Thinking Iron Man a traitor, he sicks the Mandroids on him. Tony confidently takes on the five Mandroids, and disables them after a quick fight. Back at the armory, he discovers the widow has sprayed him with the alloy signatures, making him a fugitive of S.H.I.E.L.D.! Still refusing to help S.H.I.E.L.D., Tony decides to sleep on it and lay low for a while. His confidence still plagues him, and while the Black Widow heads for her next rendezvous, he decides to take to the sky with a little backup help from Rhodey against the repaired Mandroids. After the fight, Tony takes the stealth armor to track down the chemical signature back to the Widow in hopes of finding her employer. In a helicopter above international waters, Natasha arrives at Hammer's floating castle island, she is impressed - is his vacation home on the moon? Before they can get a little rest and relaxation, Iron Man arrives - but so does the Ghost! The four of them fight for the alloy sample, though Hammer is smart enough to escape to "live to scheme another day".

Ghost finally exploits Iron Man's chivalry, forcing him to save Natasha instead of taking after him, and he escapes with the prize. He takes it to Stane. Iron Man again argues with Fury, his name is cleared but he's cost S.H.I.E.L.D. a lot of money in destroyed Mandroids. In Natasha's cell, Fury is impressed, and he offers her a job!

Retrieved from "https://marvel.fandom.com/wiki/Iron_Man:_Armored_Adventures_Season_2_11?oldid=5756877"
Community content is available under CC-BY-SA unless otherwise noted.