"All The Best People Are Mad" 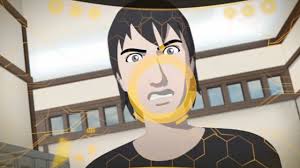 Episode Title
"All The Best People Are Mad"

"I think therefore I am"

Appearing in "All The Best People Are Mad"

Synopsis for "All The Best People Are Mad"

A sleepy Tony dozes off in the armor as he's patrolling the city at 4 AM in the morning. But before before he can go get sleep, he intercepts police cars chasing down Maggia goons in a van. As the sun rises, he disables them. He makes it to school late and almost falls asleep on his desk. His classmates comment on his fresh smell - when was the last time you changed that shirt? He soon gets his wish for sleep, as a purple gas seeps into the classroom, knocking everyone out. He wakes up in the theatre, a spotlight on his face. The curtain is drawn away and Rhona and Andrew Erwin threaten him from the screen. She means to put him through a deadly test, as she feels he is humiliating her and making her life in class difficult (before he started, she was the smartest kid in class). She declares that Tony has to answer 5 questions correctly, or something bad will happen - she reveals Pepper held hostage, chained to a pole on the stage. A mirror-focused beam of intense light is fired at the stage, slowly inching towards Pepper while Tony's sleepy brain struggles to remember the answer to Rhonda's question; who created this first "laser"? Tony answers "Archimedes", Pepper is released and Rhonda and her brother laugh hysterically from their control room (a classroom elsewhere). Her brother sucks up to her a lot, but he wants to try too - Rhona's ego becomes more apparent and she insists she's the super villain and he's the evil henchman. Tony and Pepper make for the door, but Rhona reveals she has Happy, Rhodey and Whitney hostage, forcing him to play along.

He now has 60 seconds to solve a math problem or Rhodey gets cut in half with a saw. The first answer to the problem gives them the room Rhodey is in - pi - room 3-14, but as they enter, the floor is trapped with numbered pressure plates. He reasons the safe spots are for pi squared - 9.869. He reaches the off button to save Rhodey with 3:14 seconds to go. Andrew rewards Tony with a life line, much against Rhona's wishes. The friends arrive at the next test to find Happy strapped in an electric chair. Philosophy question - who made the statement Cogito Ergo Sum - "I think therefore I am"? Not being strong in philosophy, Tony remembers it is René Descartes, as he was also a brilliant physicist. Happy is ecstatic to be freed, hugs everyone and declares Tony his new hero instead of Iron Man. The next clue - a C-note brings them to the music room where Whitney is trapped in a tank. He has to identify a piece of classical music before she is gassed to death, Tony calls on Happy as a life line - much to everyone's dismay. But Happy quickly identifies the piece as Beethoven's symphony no 3, the funeral march second movement (his mother is a concert cellist and he quite likes Beethoven too). Rhona brings up the final question - the name of the heaviest stable or meta-stable nucleus - or in 60 seconds a bomb will go off in the school's East wing where they are located. Tony protests that the answer is technically impossible, Rhona laughs. Tony decides to defuse the bomb instead, succeeding using random tools from his friends' pockets.

Not hearing her desired explosion, Rhona sends Andrew to stop the escaping friends. Tony makes a detour to equip his Mk II Iron Man suit from a backpack in his locker. Andrew proves immensely strong, throwing both Rhodey and Happy aside. Iron Man knocks him down, but is met with Andrew's laser beam eyes. He scans to find out - Andrew is an android! The two battle while the friends make a run for the exit, and are stopped by Rhona brandishing a shrink ray. While she monologues about the stolen Pym particle designs she based it on, Pepper kicks her down, and with Whitney in the fight too, they easily keep her at bay. Iron Man talks with Andrew, trying to confuse him about his origins and convince him to stand down - Andrew thinks he is a human being. During the fight, Iron Man burns a hole through him, exposing the wires. Dying, he stumbles for Rhona who declares that, even though those memories are programmed, he is very real to her as her beloved brother. She blames the friends for her brother's "death".

Outside, the police arrives to pick her up. Pepper's dad explains that Rhona is really a Rhona Burchill escaped from the Ravencroft Institute after having attempted to blow up the Baxter School. He explains she, being an orphan, might have built Andrew in an attempt to have a family. Tony tells Rhona she is wasting her brilliance this way, they could have worked together instead - but Rhona is even madder at both Iron Man and Tony now. A woman shows up to take Rhona back to the Ravencroft Institute to "take good care of her". The final clip shows the woman's eyes turning red before the screen fades.

Retrieved from "https://marvel.fandom.com/wiki/Iron_Man:_Armored_Adventures_Season_2_12?oldid=5213323"
Community content is available under CC-BY-SA unless otherwise noted.