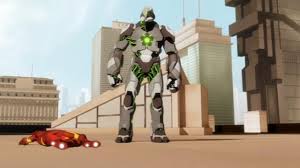 Iron Monger! Stane! Let go of the girl, before I make you!

Obadiah Stane is demonstrating the Iron Monger - upgraded with a adamantium-vibranium armor - as a weapon to general Ross. Iron Man smashes through the roof to have a little talk with Stane about the stolen armor specs that he's just signed a record sized contract on. Stane thanks Iron Man for the inventions. He threatens Stane that he will finish his warmongering, but manages only to motivate Stane. Back at the armory, an enraged Tony declares he will destroy all his armor and specs as he feels responsible for the dangerous weapons tech being available to his enemies. He quits! Rhodey tries to calm him down and talk him out of it. Hearing the news that he is about to be number two in the arms race, Justin Hammer freaks out and fires a gun at the TV to blow off some steam. Hammer still has aces up his sleeve, however. In his excitement he nearly shoots Sasha, who narrowly ducks behind the gun's suitcase. Rhodey has discovered useful secrets among the Iron Monger data they stole from Stane, giving Tony something good to strike back with. Due to his new business successes the board of Stark International have decided to make Stane the permanent CEO instead of letting Stark inherit. He and Roberta arrive at the meeting to reveal footage of Stane dealing with the Ghost - a wanted criminal! Stane is fired and removed by force, but hearing Tony's words he is finally starting to piece together the puzzle of Iron Man's identity.

Stane is ruined, but his daughter encourages him. While Tony celebrates by taking his armor for a spin, Stane plots in the Iron Monger lab. The friends are unhappy to see Tony quit, and Rhodey bails as he learns he'll even lose the War Machine. Pepper runs after him, abandoning their station at the armory. Tony soon bumps into Titanium Man who wants to strike a deal with him to destroy Iron Monger and Stark International. At Tony's refusal to help, Hammer strikes him down, but as he finds out that Stane is in the Iron Monger lab, he must go to take him down first. In the Iron Monger lab, 3 mechs are shown ready for launch. Stane disables the guards with a stun gun and launches a mech, with Hammer watching. He plants a bug on the mech, so he can remote control it if he wishes to. Tony, out of power, heads for the armory, but spots Iron Monger heading towards the Rhodes' family home where Pepper is also over for dinner. He demands to see Tony, he knows his secret! Pepper runs out to distract him, he grabs her and runs off with her as bait. Realizing playing the hero can award Hammer with enough contracts to buy out Stark International, he valiantly attempts to rescue Pepper but is horribly outmatched. In classic King Kong style, Stane climbs Stark Tower with Pepper in hand, but War Machine and Tony (in hulkbuster armor) arrive to rescue her. Stane stomps on Iron Man, revealing that he's figured out it is Tony, and a distressed Whitney appears to talk Stane out of it - she doesn't want her dad put in jail forever.

Hammer is disappointed, he wants wanton destruction, not emotional scenes! He lets Sasha take over to send Iron Monger on a rampage. Tony quickly realizes Hammer's schemes and attacks him. War Machine tries to help Stane escape from the rampaging armor. Iron Monger moves for Whitney but crashes to the ground, gravely wounding Stane. The two heroes attack Titanium Man, knocking him far away - Hammer's desperate cries only has Sasha yawning as she disables communications with him. A bitter Whitney watches as Iron Man breaks a comatose Stane out of the damaged mech. She blames Tony for driving Stane into doing these desperate things, and vows that he will be sorry.

Retrieved from "https://marvel.fandom.com/wiki/Iron_Man:_Armored_Adventures_Season_2_13?oldid=5213324"
Community content is available under CC-BY-SA unless otherwise noted.