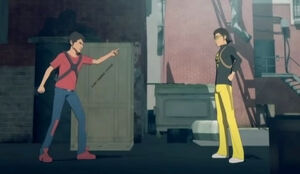 Tony is worried about Stane and Whitney, but school calls. On his way home, the voice of the Mandarin calls him into an alley, revealing that he ,too, knows his Iron Man identity. Gene requests their help, Pepper demands apologies. He reveals the existence of 10 rings, and requests help to find the 8th - but Tony suits up and attacks him. Pepper calls for Rhodey's help, but the Mandarin overpowers Tony and hypnotizes him with the power of the seventh ring. Before War Machine can attack, Gene teleports them to the 8th temple, taking Pepper along with the spell.

War Machine tracks Pepper's satellite signal around the globe to a temple in the Egyptian desert, and, hoping Tony has improved the War Machine's space capability. He sets an orbital trajectory for them. Inside the temple, Gene saves a confused Tony from a trap, it seems a bit as if the will-breaking spell is wearing off. The temple's puzzle is as such: "He who would master the future, must endure the pain of the past." - the ring is inside the grim reaper statue, and Tony must get it for him. He reaches into the statue's mouth, endures the pain and takes it, but, finally breaking the mind control and taking up the fight again. With War Machine on the way, Mandarin and Iron Man struggle. The Grim Reaper statue activates in a ghostly form, and declares: "You must endure!", its attacks slice through the two and seem to paralyze them where they stand. It returns to its pedestal, and the ring reappears in its mouth.

Outside, Rhodey reports that a dust storm is swallowing the temple. Inside Tony's mind, he is back on the plane with his father, surprised to see him alive, he again relives the attack. In Gene's mind, he is running through bamboos to a house where his step father and Tong ninjas await. His stepfather unexpectedly has all the Makluan rings, transforms into the Mandarin and attacks Gene, wishing him to beg for mercy. Tony faces a nightmare board meeting where Stane is selling the armor technology, using it for everything from military Hulkbusters and police, to simple window washers and gutter cleaners. Stane fires him, Tony suits up, and Stane orders suited goons resembling War Machine to bust him up. He is about to lose, but Pepper's encouragements bring up his iron will - his own armors cannot best him - he has endured and escapes from the dream. War Machine attempts to break into the storm and succeeds. The Mandarin is still paralyzed, but the Reaper now attacks Tony for real. The friends shake the Mandarin, and, as Tony makes him realize his fears are only as bad as he makes them, he awakes.

The two quickly destroy the temple guardian, and War Machine arrives. Pepper attempts to escape with the ring, the Mandarin stops her. She appeals to his better self, but, insisting he is doing it all for a greater good he takes the powers of the ring to himself - he can now move and super speed and create wind vortexes. The Mandarin stops the dust storm, setting the friends free, and teleports away. At the Tong hideout, he berates Howard Stark and says he will rot in his cell until Gene has all the rings.

Retrieved from "https://marvel.fandom.com/wiki/Iron_Man:_Armored_Adventures_Season_2_14?oldid=5213325"
Community content is available under CC-BY-SA unless otherwise noted.