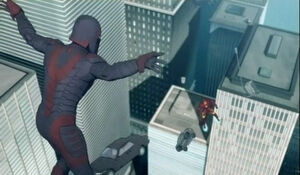 You are a clever, if frustrating, foe, and when I finally get to you, I'll twist you into abstract art!

Appearing in "The X-Factor"

Synopsis for "The X-Factor"

Examining an empty parking house, Tony is detecting strange magnetic disturbances all over the city. He finds an unconscious man with an I-beam wrapped around him. Magneto arrives, and effortlessly flings Tony out of the building by means of his metal armor. The man in the parking building proves to be Simon Trask, an pro-mutant-registration spokesman. Pepper thinks registration is a good idea, but Rhodey thinks stuff like that belongs in the 1950s. There's a new student in class, Annie Claremont, threatening Pepper's status as the cute redhead. Tony is excited for all the new ideas he's gotten since his Extremis upgrade, Annie faces some teasing but defends herself, mysteriously locker doors swing just in time to smack her bully around. Rhodey and Tony go to the roof to cheer Annie up, with Pepper keeping some distance. They all go out for dinner, and Annie reveals her telekinetic and telepathic abilities, she trusts Tony and Rhodey as she knows they too have secrets. She reveals that she is on the run from Magneto who wishes to use her for his own purposes. Outside, Magneto attacks!

Frightened, Annie attempts to defend herself against the cars Magneto throws around, and the friends attempt to flee. Tony arrives in his suit, and Magneto introduces himself, easily tossing Iron Man about as his suit is largely made of iron. Magneto makes off with Annie, and, having her trapped in his hideout he reveals his plan to have her kill Senator Kelly, who means to register mutants and even regulate their births. Magneto recalls how he such mutant haters experimented on him as a child before he escaped. In the armory, Pepper suggests Tony should build some plastic armor instead, but really she advises him to let mutants deal with their own issues, Rhodey protests that since they are all people they should still help. Tony believes he can modify the suit's magnetic repulsor shields to compensate for Magneto's use of magnetic fields. Since the War Machine armor is more offensive than defensive he insists on not upgrading that. In Magneto's hideout, Annie lashes back at him, saying he is just as evil as the prejudiced humans he feels so above. He chokes her. He will make it seem like the senator died from natural causes using Annie's abilities to fake a heart attack.

Iron Man and War Machine track down the magnetic signature of the hideout, the magnetic fields messing with their sensors already. The location is a rigged to blow, but Iron Man protects them from the blast with his shields. While Pepper reads Magneto's long file of villainous deeds, Annie manages to contact the heroes telepathically to reveal her location. Annie, bound in bent metal, and Magneto are above the Senator's speech, where he proposes to register mutants, as one would register a gun. Annie concentrates on his heart, but stops, believing every form of life precious. Magneto calls her a weak fool, and moves to hurt her - but Iron man and War Machine arrive to interfere. Tony can now use his shields to defend against the magnetic attacks. He releases Annie who warns him that he doesn't know Magneto's strength, and goes to battle. Annie saves the senator from falling rubble. War Machine is defenseless against Magneto's attack, and Iron Man holds up little better as Magneto flings cars at him, squeezing him between them. Annie tells them to get Magneto's helmet off so she can affect his mind, Iron Man goes on the offensive. Magneto, busy pinning Iron Man to a roof and crushing his armor, doesn't notice Rhodey arriving to snatch off his helmet, opening him for Annie's mental attack. He falls to his knees, paralyzed. Safely down on the streets, the Senator Kelly attempts to put all the attack on her but is booed away by the mob who feel Annie is their savior.

In school, Annie reveals her true identity is Jean Grey, and Professor Charles Xavier arrives to take her into his school for mutants.

Retrieved from "https://marvel.fandom.com/wiki/Iron_Man:_Armored_Adventures_Season_2_17?oldid=5213329"
Community content is available under CC-BY-SA unless otherwise noted.