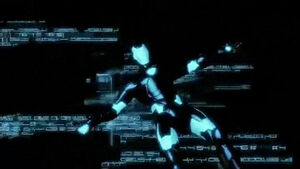 I have no record of "friends".

Iron Man is in a deserted Makluan temple... the armory and his friends are missing. The Rhodes' residence is occupied by a retired man, and at school, Whitney and Happy never heard of any Rhodes or Pepper characters. He fears the Mandarin or Doctor Doom have altered reality to mess with him. Desperate, he tries to remember when he last saw his friends - he and War Machine were busting a weapons deal between A.I.M. and Hammer when they both got taken out. Tony seems to have large gaps in his memory, and his armor hasn't recorded anything either. He figures he will confront Justin Hammer, but at the CEO office at Stark, he only finds Basil Sandhurst - The Controller.

Basil claims he now controls the whole world, and proves so by effortlessly punching Iron Man out of the building. Iron Man wonders how Basil got so strong, now attacking him with beams shooting out of his arms. He flies and moves with the speed of thought. He is trying to probe Tony's resisting mind to learn about his Extremis upgrade, Basil wants it for himself. In the hectic battle, a car suddenly turns into wireframe and disappears, Iron Man catches the Controller muttering about a glitch. He realizes the reality is a virtual one, the Controller laughs and welcomes him to the Mainframe! With Extremis, he would be able to expand his virtual reality and control the minds of everyone. Iron Man struggles on, unwilling to open his mind anymore. He taps into the mainframe, and overwhelmed with the data he almost loses himself. Controller begs him to stop, damaging the mainframe can fry both their nervous systems. He creates an illusion that Pepper and Rhodey are in danger. Tony sees through it, and continues to hack until the virtual reality environment breaks down.

They both come to at an A.I.M. base, and Iron Man breaks his restraints to attack the Controller. He calls in a mind controlled War Machine to take Iron Man out. Rhodey struggles against the control, causing a return surge to the Controller's helmet, disabling him. Basil comes to, seemingly having amnesia. They return to the Armory where Pepper is worried sick, they've been gone for three days and she's had to lie to Mrs Rhodes. Tony feels unsure what is real or not, and indeed as they leave, the armory glitches out for a second behind them.

Like this? Let us know!
Retrieved from "https://marvel.fandom.com/wiki/Iron_Man:_Armored_Adventures_Season_2_19?oldid=6497411"
Community content is available under CC-BY-SA unless otherwise noted.