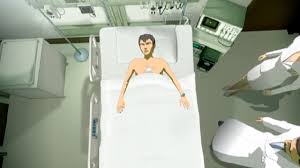 Doctors are desperately trying to save Tony's life, but not knowing how to handle his failing heart implant they initially make it worse, causing him to flatline. Dr Yinsen arrives at the scene, and telling the Rhodes family and Pepper that he will do his best, he gets to work. At Mister Fix's hideout, Stane wakes up and tries to buy his freedom, and thinks he recognizes the client as being Count Nefaria. At the hospital, Yinsen first jokes that Tony is dead (!) but then says that he is pulling through, and that he is very strong. Howard and Gene have made their way into the sixth temple, where the ring is guarded by an entity known as the Melter.

Tony wakes up at the hospital and is greeted by his friends. Justin hammer shows up to talk to Tony, making Pepper blush and stutter. Justin makes Tony a business proposition, but Tony refuses, not wishing to be in the weapons business. Though he needs another week of recovery, Tony persuades his friends to bust him out of there. Having returned to the armory, Tony reveals his improved Mk II armor whose life support systems he hopes will aid him in healing faster too. He shows off the new weapons; flares, miniature missiles, sonic disruptors and force fields he can deploy on a target to trap or protect them. Pepper is excited and shows him a sketch of a purple, feminine armor she's designed for herself since both Rhodey and Tony have one. Tony tries to weasel out of her requests, but promises to think about it. Pepper exclaims that Iron Woman will be a lame name, so she'll think of something.

Back at the warehouse, Mister Fix realizes the recovered chunks of Iron Man armor are more damaged than anticipated, but they still enable him to finish his new micro wave weapon, claiming it will enable him to cook the pilot inside Iron Man and leave the armor intact. Obadiah Stane attempts to escape his captors, but finds that Blizzard is in league with them, and eager as ever to kill him. Iron Man and War Machine have tracked their way to the warehouse to bust out Stane, but Mister Fix is waiting for them there. Iron Man disables the security staff with his sonic disruptors, and War Machine disables a man with a rocket launcher. They detect strange computer interference in the building, and we see Whiplash sneaking up on them from the rafters. Mister Fix gets a shot at Tony with his microwave beam and Blizzard freezes Rhodey, however Tony is up before Whiplash can finish him off. They manage to thaw Rhodey and the battle continues, Mister Fix thinking War Machine an easier target attacks him along with Blizzard. The battle goes both ways for a while, but the heroes finally win. They free Stane, but still wishing to humiliate him, they simply drop him off at a roof rather than help him get home.

Mister Fix escapes the encounter, and is picked up by his client, who proves to be Justin Hammer! He injects Fix with a nanovirus which will enable him to "fix" him for good if he is disobedient in the future. In the mountains, the Mandarin has acquired the sixth ring.

Retrieved from "https://marvel.fandom.com/wiki/Iron_Man:_Armored_Adventures_Season_2_2?oldid=5213332"
Community content is available under CC-BY-SA unless otherwise noted.