"Rage of the Hulk" 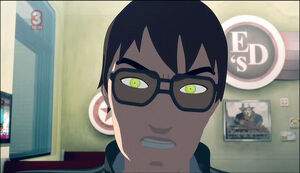 Episode Title
"Rage of the Hulk"

We're just getting started. If our boys can replicate the gamma effect, we'll have an entire army of Hulks under our command. No one could stop us.

Appearing in "Rage of the Hulk"

Synopsis for "Rage of the Hulk"

Tony takes out a couple of A.I.M. goons, then rushes to a meeting with his father - but he's late again. Howard reminds him that they must be responsible with the power they have. As they walk together, they bump into Bruce Banner who was thought missing - but he's on the run from the police, and almost Hulks out in front of the Starks. They take him to a diner, and he begins to explain some Hulk facts, while helping himself to a big lunch. He and Howard had both worked on the Gamma Energy project, but both opted out when it turned towards bomb building. Bruce attempted to break in and recover his research, and runs into Rick Jones, casually motorcycling in the blast zone. The bomb goes off, and Bruce is irradiated after knocking Rick to safety. Bruce believes Howard's fallout siphon device can take the radiation out of him.

At an outdoors lab, they begin the experiment, but S.H.I.E.L.D arrive to bring Banner in, attacking the area. They see the Starks are there, but General Ross interferes, taking command and ordering a full attack. Desperate and angered by the shots, Banner transforms, knocking Howard out. He attacks the Helicarrier. Tony suits up, and tries to calm him down - but gets smashed. Hill enters the battle. Iron Man calls for the Helicarrier to cease fire, but Ross simply sees him as interfering with U.S. military command. Seems he is taking the Hulk thing personally. As attacking him only makes him stronger, they finally manage to pacify him with sleep gas. Banner captured, Ross is proud of what his aggressive tactics accomplished, but Fury reminds him that he damaged S.H.I.E.L.D. neutralizers and endangered both civilians and the entire crew. Iron Man and Howard step in, Hill almost reveals his identity. S.H.I.E.L.D. is under U.S. military command for the capture of Dr Banner, which is why they have Ross to deal with. Ross has no desire to cure Banner, he wants to get more Hulks under his command. He elects to throw the meddlesome Starks in the stockade.

Pepper has been monitoring the Helicarrier from the armory, and has seen it contains other sources of gamma radiation than Banner. She's tapped into a security camera that shows what Ross has up his sleeve - killing Banner. He informs Howard, and begins to hack the S.H.I.E.L.D mainframe to free Banner. Just thinking about Ross makes Banner Hulk out again. Tony summons his Hulkbuster armor, and War Machine follows. Hulk busts his way out, crippling the Helicarrier. Tony equips the Hulkbuster, and he and War Machine gets the the Helicarrier upright for long enough to restart an engine and prevent it crashing into the city. Ross, still going for aggressive tactics, deploys tanks to the streets... giving Hulk more thinks to throw at the heroes'. War Machine is out, and Hulk rips the arms off Tony's Hulkbuster suit. Ross deploys Mandroids, whose combined beam weapons knock the Hulk out. Ross must deploy the fallout siphon himself, as the Helicarrier staff remain loyal to Fury. Iron Man attempts to stop the siphon, but it overloads and Ross makes a run for it. Hulk finally realizes Iron Man is helping him, and tosses him out of the ensuing gamma explosion.

Iron Man, War Machine, Fury, Hill, Howard and Ross return to the smoking crater, to find a Gray Hulk. He explains, eloquently, to Ross that he would like nothing more than to squash him, but he is not worth his time. He calmly and confidently walks over to the heroes, then leaps off to find a peaceful place to stay. Howard eyes the iron men and says he better go check on how his son and his friend are doing...

Retrieved from "https://marvel.fandom.com/wiki/Iron_Man:_Armored_Adventures_Season_2_22?oldid=5756884"
Community content is available under CC-BY-SA unless otherwise noted.