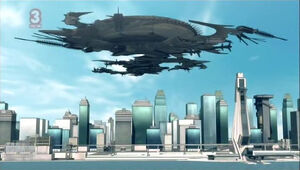 Tony shows his father around the Armory. In his frustration and struggle over the Mandarin, he's even forgotten his own birthday.

Soon, the Mandarin broadcasts his desire to bring peace by total world domination. Tony blames himself for letting it come to this. Howard suggests they come up with a plan for disabling the rings, as they are not magic, but a form of advanced technology. But Tony doesn't think they will have the time to build another Quantum Dot supresser, so the team all suit up and go to take Mandarin head on.

Nick Fury and S.H.I.E.L.D arrive first, deploying mandroids to contain Mandarin. He easily takes him out, but in the distraction, Black Widow gets a shot off on him. He shoots her down, and, having had enough, sends the S.H.I.E.L.D helicarrier and into the negative zone. Team Iron Man arrive, but he throws them to the ground. Howard is watching from the armory, something about the Makluan energies are not coming from the Mandarin. On cue, a large spaceship de-cloaks over the city, firing a ray that takes out the Mandarin. Hawkeye watches from a roof, saying he sure hopes those are the good guys. Howard reasons the vessel is of Makluan origin.

In Wakanda, Black Panther calls for his quinjet to be readied. In the streets, the gang regroups with what is left of SHIELD; Fury and Romanova. They assume it is a full scale invasion, and they must gather intel. Aboard the spaceship, the Mandarin is held captive. A Makluan arrives, ordering him to relinquish the ten rings by order of the Makluan Overlord. He battles, but the Overlord steps in, overriding his rings and making him kneel. He commands the rings and takes them from Gene. Smaller battleships emerge from the starship, and the heroes take them on. Rescue is embarrassed when Fury saves her from an armor-disabling attack. The Makluan overlord is impressed with the heroes, and decides to teach Gene the origin of the rings, and the prophecy that they would bring peace - though it's the same sort of peace that Gene himself would offer; dictatorship. He'd like to test Gene's worthiness.

Howard and the team discuss their plan to use a disruptor field, but the armored heroes are beamed to an arena in the starship along with Gene. The Overlord declares he will test the planet's worthiness by pitting the heroes against his own champions - it amuses him to fill them with hope before he destroys them. Without his rings, though, Gene will have to make do with his martial arts skills.

The humans are initially beaten, but when they use their intelligence they win. The Overlord summons the greatest champion; the berserker, who seems to glow with an energy that makes him unstoppable. They notice his energy seems to flare up and down, and decide to attack him in his vulnerable phases. He grabs Pepper despite her stealth, but Gene stabs his tail. All their repulsor attacks seem to empower his shield, Gene reasons their attacks only make him stronger, but that maybe his hammer is what allows him to release the energy. Tony traps the hammer in a force field, and the others blast the Berserker. Gene is able to knock him back too, and they finally overload the berserker, who collapses.

Angered, the Overlord releases his full fury upon the Earth.

Retrieved from "https://marvel.fandom.com/wiki/Iron_Man:_Armored_Adventures_Season_2_25?oldid=5422793"
Community content is available under CC-BY-SA unless otherwise noted.