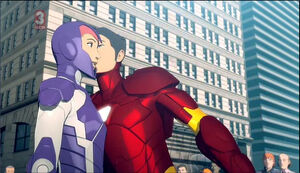 The heroes watch as the Makluan ship sends more destroyers into the city. Pepper wants to tell Tony something important before they are all killed, but the battle interrupts them. Gene tries to trick the Overlord into taking him and leaving the Earth alone, but it seems he isn't valuable enough. The heroes are stretched thin, when Fury, Widow and Hawkeye rejoin the battle. Virgil Potts is in the streets, directing evacuation. Pepper saves him from a battleship and must quickly make up a phony voice so he doesn't recognize her. The wave of battleships destroyed, the heroes regroup and discuss the situation. Since the Makluan Overlord hasn't simply used his rings to wipe them from existence, he must be merely toying with them by now. At the Armory, Howard is still working on the new disruptor weapon, but warns that it will not be as precise as the earlier version.

The Overlord is impressed with the heroes, and sends the Maklua planet protector robot, Ultimo, to challenge him. Iron Man notes that the tech is too alien for him to hack with Extremis. The armored heroes distract him while the others attempt to bomb out his feet. Ultimo snatches Iron Man out of the air. Hulk shows up, looking to smash some giant robot. Fury, Widow and Hawkeye successfully bomb the feet, staggering Ultimo. Hulk knocks him to the ground, and Iron Man flies into the robot's mouth, detonating its head from the inside. They cheer to have won the battle, but the ship again shoots a strong beam at them. Panther arrives in his quinjet to save them, they board to regroup. The Overlord thinks they have fled, now that Earth has given up, he will wipe it out.

Tony has a plan, which'll probably get them all killed - but it's Armageddon anyway. One team (B) will enter the Makluan ship, locate its reactor core and overload them. Team A will take the Overlord on directly. Rescue again attempts to tell Tony something, but he has no time. The disruptor is ready. Howard nabs the space armor so that he may connect the beam to the Stark-1 satellite and pinpoint it at the Makluan ship. The Overlord announces he is ready to destroy Earth, and they must make their move.

Gene attacks the Overlord with a sword, but he is quickly disabled. Before he can finish him, Iron Man, War Machine, Rescue and the Hulk enter the shuttlebay, ready to take the battle to the Makluans. They clear the shuttle bay of Makluans and their alien machines. Howard, in the space armor, arrives at the satellite and begins to attach the beam.

Team B; Hawkeye, Widow, Panther and Fury, blast their way through an airlock and soon arrive at the reactor core, but Makluans move in to defend it. They battle their way forward and manage to plant some bombs on the core. They start the bomb timers and escape via the vent again.

Team A arrives at the throne where the Overlord and Gene are - Iron Man again blames Gene's greed for getting them all into this. Hulk and the Overlord go fist to fist, they are equally matched but the Overlord manages to use his rings to zap Hulk back into Banner. The armored heroes are not much good against the rings either.

The Makluan Overlord gloats at Iron Man's seemingly empty threats of taking him down. Howard has difficulty calibrating the satellite's targetting, but Tony offers to direct the beam himself via Extremis. He hits the Overlord spot on, disabling his rings. They all fire their unibeams at him. Fury informs them that the ship's gonna blow in a minute. Gene grabs his rings back, laughing, he fires past the heroes and at the Overlord. At Iron Man's request, he teleports out with Rescue, War Machine and Banner. Iron Man punches the Overlord, but the power core explodes. He crashes to the ground, but as crowds rush in, he gets up, declaring they are all safe from the alien invasion. His helmet was damaged in the blast, and the crowd recognizes him as Tony Stark. Rescue and War Machine reveal themselves as well, but Virgil Potts and Roberta Rhodes emerge from the crowd. Rhodey is grounded until he is 22, but she's happy.

Howard arrives. Seeing they are all unmasked, he takes his helmet off as well. Panther, Fury, Hawkeye and Widow arrive too, congratulating Tony on his plan without which it would not have worked. Pepper again means to tell Tony something, but he simply grabs her and kisses her cheek, hugging her.

They all wonder where the Mandarin went, when the Helicarrier reappears on the sky. The Mandarin is seen in his homestead's bamboo forest again, "You were right, Mother. Perhaps I'm not supposed to rule the world. Perhaps, I'm supposed to protect it."

The three armored heroes fly home, wondering what to do now that everyone knows their identities. They no longer have to lie. Tony believes it's a change for the better, he feels good and hopeful.

Like this? Let us know!
Retrieved from "https://marvel.fandom.com/wiki/Iron_Man:_Armored_Adventures_Season_2_26?oldid=6497419"
Community content is available under CC-BY-SA unless otherwise noted.