"Ghost in the Machine" 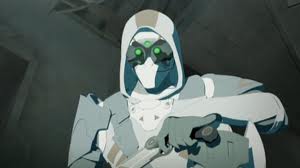 Episode Title
"Ghost in the Machine"

Well, well, well. What an interesting turn of events. Who would have thought that Tony Stark is Iron Man?

Appearing in "Ghost in the Machine"

Synopsis for "Ghost in the Machine"

Obadiah Stane hires the Ghost to steal the Iron Man armor, so Ghost sets up a danger and makes a helicopter shut down. This alerts Iron Man to save the men in the helicopter, and fly back to the Armory. As Tony goes back to the Armory, Ghost follows. Tony's identity is revealed to Ghost, and Ghost steals all of the armor specs. He sells them both to Obadiah Stane and Justin Hammer, and tells Tony he won't reveal his identity, until he is 18 to blackmail him. The episode ends as Tony claims that what just happened just started a "war", starting up an "Armor Wars" type of storyline.

Retrieved from "https://marvel.fandom.com/wiki/Iron_Man:_Armored_Adventures_Season_2_4?oldid=5594032"
Community content is available under CC-BY-SA unless otherwise noted.