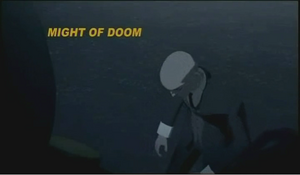 Doom arrives to make a deal with Stane; Stane gives him the Iron Man armor specs he has, and Doom helps Stane with his Monger project. Upon seeing the data however, Doom claims he finds the Iron Man armor inferior as he expected. Whitney is worried that her father is on edge over the diplomatic visit, Tony already knows about it as he's been snooping on Stane's encoded transmissions. Rhodey reminds him that Doom's status as a diplomat will make dealing with him difficult. Stane shows Doom his Monger core, and Doom offers to replace the unstable nuclear source with his own quantum designs, reducing the size by 83% and increasing the output thousandfold. He suggests the program having difficulty can be due to Iron Man tampering with it, and Doom detects Iron Man's approach. Doom attacks, and Tony soon feels his armor is a toaster with arms compared. Rhodey suits up, Doom threatens Tony to give up his armor, attacking him with magic and throwing his consciousness into a dark void. Tony passes out, War Machine attacks but his bullets bounce off Doom who easily throws him off. Remote controlling the armor, Pepper knocks Doom out and together with War Machine they run for it.

Tony is still unconscious, his mind in the black void, struggling against the illusion. The memory of Rhodey and Pepper gives him a door out, but he's been out for 3 hours. In those 3 hours, Doom has created the miniaturized Monger core, but it is still not stable. Tony puts bugs on Stane in order to spy on the project, though Doom disables one of the bugs. Tony is busy analysing the scans of Doom's armor, realizing it is incredibly advanced and uses quantum technology that is at least 10 years ahead. He's also found Doom's weakness; after an attack his armor needs 1.7 seconds to recover, this he could amend with technology from Tony's armor. The Monger project is unstable, but Tony, watching over the bugs, notes that he hasn't sabotaged it - rather, it is Doom turning the power core into a bomb powerful enough to destroy the eastern seaboard. Tony arrives to attempt to defuse it, but while he is unable to break the system, he succeeds in containing the blast with a force field, even if part of the building is destroyed and he is injured in the process.

Doom is on his plane, leaving, and discovers that his bomb has failed to go off. War Machine attacks his plane. Iron Man arrives, and the two battle Doom. Insults and punches fly, as Doom again tries the demonic grip to knock Iron Man out - War Machine attacks Doom to break the attack. Then, Shield arrives to pick up Doom and ship him to Latveria, as his diplomatic immunity protects him. Fury and Iron Man argue again, but Fury knows about Doom and only advises Tony to keep his friends close, and his enemies closer. Realizing he has again missed out on a date with Whitney, he arrives to apologise but doesn't tell her the real reason; that he is Iron Man. She breaks up with him, but they attempt to stay friends. Back in the armory, the scan of Doom's armor has finished, and Tony discovers the power sources are not unlike those of the Makluan Rings.

Howard and Gene move through the seventh temple, Howard boring Gene with his theories that the rings are not magic, but an ancient technology he has yet to figure out where is from. They arrive at the seventh ring and its guardian; the Centurion.

Retrieved from "https://marvel.fandom.com/wiki/Iron_Man:_Armored_Adventures_Season_2_8?oldid=5756874"
Community content is available under CC-BY-SA unless otherwise noted.