"Hawk and the Spider" 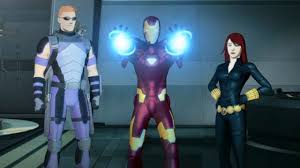 Episode Title
"Hawk and the Spider"

I just got jacked by Robin Hood!

Appearing in "Hawk and the Spider"

Synopsis for "Hawk and the Spider"

Using a synthesized Whitney voice, Pepper lures Obadiah Stane out of his office. Iron Man enters to steal a user interface chip from the safe - but it is quickly snatched from him by Hawkeye! He gives chase, but Black Widow arrives and shocks his armor, neutralizing him. He watches helplessly as Hawkeye and Black Widow makes off with his prize. At their hideout, Clint (Hawkeye) and Natasha (Black Widow) talk; they are working for Count Nefaria but this last job can buy them out of that - and get them a vacation. Natasha doesn't want to stop working however, she wants to be a spy again, rather than stealing from the rich. Their flat is attacked by Titanium Man who has tracked them via satellite so he can grab the Starktech for himself. He overpowers them.

Pepper has found intel on the two thieves (she is very jealous of Natasha being trained as a spy since the age of 9), and Hawkeye's brother's debt to Nefaria. Iron Man is tracking the chip's frequency to find the thieves, but has to rescue them from the rubble Titanium Man left them under. Natasha immediately attacks him again, planting a motion sensitive bomb on his chest. Hawkeye is more doubtful, but again runs off with her. Tony quickly disables the bomb, and decides to break out the Mk II for the next fight. Justin Hammer arrives at his lab, chip in hand, and satisfied that his new titanium-vibranium armor made by Fix 2.0 lives up to his expectations. They examine the chip, Hammer wants it in his armor but Fix warns that it needs to be calibrated to him first, or it can be dangerous for the user. Security detects Hawkeye and Black Widow having entered the building, and they fall in a grinder trap. It becomes clear that Hammer is treating it as a game, and his staff noticeably unnerved. They break out their excellent acrobatics skills and teamwork to fight back, suspended above the grinders. Iron Man enters too, Hammer is excited to get a chance to try his new security on him...

Iron Man soon becomes trapped in a laser grid. Hammer watches, laughing manically at both him and the two thieves. Iron Man escapes, using a sonic attack to shatter the laser focus crystals, and busts his way through a wall to find Natasha and Clint, he jokingly says that next time they should carpool. They break out, and enter Hammer's now empty office. Tony sees a chance to destroy some of his stolen armor data, but Hammer soon attacks them with a remote MODOK drone which he controls with a VR helmet and a game-pad. Iron Man is protected from his attacks, but he can overpower the widow and read her memories. He tries to set the thieves against each other with the information. Hawkeye shoots him down, and, using the user interface chip they short out the MODOK. Hammer rages, and calls security to make sure the intruders no longer have any "lives left". Natasha has run off, Iron Man and Clint escape too. Clint has lost his prize, but he's decided to try to do good all the same. He heads west after shaking hands with Iron Man.

Retrieved from "https://marvel.fandom.com/wiki/Iron_Man:_Armored_Adventures_Season_2_9?oldid=5213349"
Community content is available under CC-BY-SA unless otherwise noted.