"And the Sea Shall Give Up Its Dead" 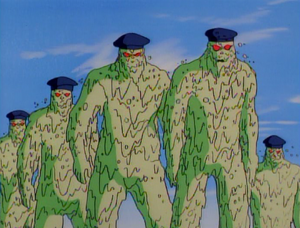 Episode Title
"And the Sea Shall Give Up Its Dead"

When you carelessly created a Fast Freeze to cool your drink, you killed my begonias! Unforgivable! But I shall spare you because I am merciful.

Appearing in "And the Sea Shall Give Up Its Dead"

Synopsis for "And the Sea Shall Give Up Its Dead"

A United States submarine detects an off-limits submarine to see if there is any trouble. Hypnotia hypnotizes a pair of Russian sailors on the submarine, the Prometheus, so they will become an army of slaves to the evil Mandarin in a year. Around the same time, Whirlwind and Dreadknight steal a microchip and give it to Mandarin for his army of the living dead.

A year later, Tony discovers the danger that lurks in the Prometheus and the Mandarin sends out his team of super villains to stop him and Iron Man, who flies to the sunken submarine with the help of the robot IRVING. Mandarin’s team ambushes and captures Iron Man while Iron Man's own team of superheroes, among them War Machine and Century, head to the ocean to save him. This team helps Iron Man escape from both Blacklash's whip and the Mandarin's alien dragon Fin Fang Foom.

At high noon, the Mandarin finally wakes the Russian sailors, now transformed into radioactive zombie warriors. These zombies invade the Hammer Channel Tunnel in London to infect the population, but Iron Man and his team stop them by flooding the tunnel and Century returns them back to normal once they surface. Modok calls in the most powerful and destructive cyber-organism in the Universe, Titanium Man, to once again try to finish off Iron Man. Iron Man's team had thought they had defeated the villain at Magnitogorsk, but Iron Man and War Machine defeat the returned villain and they send it back into space.

Retrieved from "https://marvel.fandom.com/wiki/Iron_Man:_The_Animated_Series_Season_1_1?oldid=5608498"
Community content is available under CC-BY-SA unless otherwise noted.