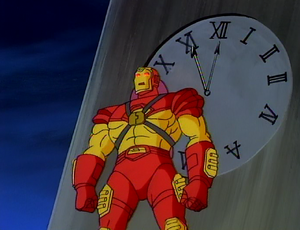 Gold is immaterial. Only power reigns supreme, my power! Mine!

Appearing in "Iron Man to the Second Power" Part 2

Synopsis for "Iron Man to the Second Power" Part 2

War Machine suspects that the Mandarin has captured Iron Man his team seeks to find him. In the Peruvian farm village, Blacklash and Dreadknight get into a fight over Hypnotia until the duplicate Iron Man interrupts them, bringing Justin Hammer and the Living Laser. The Living Laser sears the fungus on the contaminated harvest to set the Dark Water Fever toxin.

Spider-Woman and Scarlet Witch discover which suit of armor Tony took by searching the hall of armors. Meanwhile, the Mandarin plans on releasing the fever whether or not the ransom is paid. Spider-Woman and Scarlet Witch find the real Iron Man mining for minerals underwater. The Living Laser attacks them, but Iron Man saves Julia and Wanda and finds out about the duplicate.

Retrieved from "https://marvel.fandom.com/wiki/Iron_Man:_The_Animated_Series_Season_1_10?oldid=3624212"
Community content is available under CC-BY-SA unless otherwise noted.