"The Origin of Iron Man" Part 2 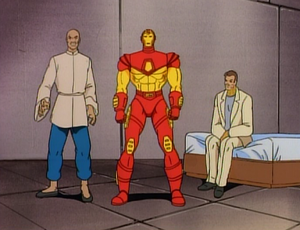 Appearing in "The Origin of Iron Man" Part 2

Synopsis for "The Origin of Iron Man" Part 2

Tony Stark continues watching his memory module where he fights off the "Lion God Emperor" that the Mandarin left him in his cell. He finds out that it is actually the famous physicist Dr. Wellington Yinsen who was kidnapped during a theater performance. Tony says the Mandarin expects them to work together, but he refuses to do it.

Meanwhile, the Mandarin's forces continue searching for Iron Man, and Stark's own team shows up to find their leader. Fin Fang Foom promises the Mandarin that if he gives him the Mandarin's mechanical dragons, he will use them to hunt down Iron Man. Blizzard locates Tony in the glacier, which starts crumbling once he enters. With his armor now fully repaired, Tony armors up and his team rescues him from the glacier.

The Mandarin informs Fin Fang Foom that Iron Man has been found. Iron Man's team fights the Mandarin's minions. Iron Man stops the Grey Gargoyle by making him turn a piece of ice into stone and knocking him on the head, War Machine puts tracers into Whirlwind's cyclone, electrifying the super-villian. Hawkeye stops Hypnotia from using her hypnotic powers, and Scarlet Witch makes Dreadknight crash into the mountain.

Retrieved from "https://marvel.fandom.com/wiki/Iron_Man:_The_Animated_Series_Season_1_12?oldid=3624214"
Community content is available under CC-BY-SA unless otherwise noted.