"Rejoice! I Am Ultimo, Thy Deliverer" 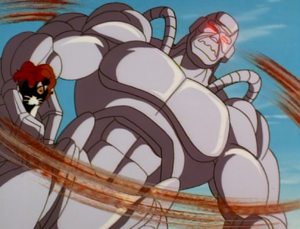 Episode Title
"Rejoice! I Am Ultimo, Thy Deliverer"

This military deserter, apprehended in Baja California, claims he wasn't deserting, he was actually running from a gigantic creature carrying what appeared to be a man-sized robot. And, get this, he said the robot called himself Ultimo!

Appearing in "Rejoice! I Am Ultimo, Thy Deliverer"

Synopsis for "Rejoice! I Am Ultimo, Thy Deliverer"

A cargo ship from Hammer Industries arrives at the Mandarin's base. The Mandarin explains that he found the ship's cargo, an alien artifact, sealed inside an extinct volcano in Latin America. The Mandarin tries to use his rings to awaken the automaton, but it does not budge. Justin Hammer decides to cut it up for scrap, and the automaton wakes up to destroy the threatening robot.

The robot says "Rejoice! I am Ultimo, thy deliverer", and the Mandarin tries use his rings to hypnotize Ultimo to make it his servant. Instead, Ultimo deflects the power and uses it to escape. On a ship called The Iron Maiden, Tony Stark attends a party until James Rhodes shows him footage of Ultimo. Tony changes into his Iron Man armor to take care of the robot's rampage.

The Mandarin attaches an occipital template to the base of Ultimo's skull to take control. When Iron Man flies in, the Mandarin tells Ultimo to knock out Iron Man and bring him to the Sky Saucer. Iron Man's team goes after their leader once they lose contact with him and stop Ultimo before he reaches Stark Enterprises' secret experimental test range.

War Machine targets the occipital template and releases Ultimo from the Mandarin's control and he stops attacking the test range. Century finds Iron Man using the infinity matrix and helps Iron Man escape the Mandarin. Ultimo taps into the planet's core, creating an earthquake while most of Force Works tries to slow down the automaton. Iron Man and the Scarlet Witch locate Ultimo's master switch. Hawkeye aims at the switch and shuts down Ultimo.

Retrieved from "https://marvel.fandom.com/wiki/Iron_Man:_The_Animated_Series_Season_1_2?oldid=5467125"
Community content is available under CC-BY-SA unless otherwise noted.