"Data In, Chaos Out" 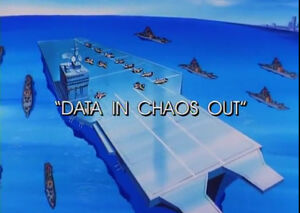 Episode Title
"Data In, Chaos Out"

Appearing in "Data In, Chaos Out"

Synopsis for "Data In, Chaos Out"

The E.L.F. takes over James Rhodes' mind and makes him accuse Tony Stark of stealing the satellite. Meanwhile, Tony and Julia Carpenter check the Stark satellites and they find the satellites have been altered to cause global unrest. James Rhodes enters the room, backed by police and orders Tony's arrest, using the altered satellites to put money in his secret account. The police take him to a maximum security prison, leaving James Rhodes in charge of Stark Industries.

Industrialist Justin Hammer makes an announcement on television that he will pledge his resources to serve the public. Julia bails Tony Stark out of prison with fifty million dollars. They travel to Mission Control Center to launch a communications satellite. Tony equips the satellite with an override chip to restore the other satellites to normal. Tony transforms into Iron Man and grabs hold of the launching satellite, hiding in it.

War Machine calls on the super-heroes Hawkeye, Spider-Woman, Scarlet Witch, and Century to "rescue" Iron Man. While the team of super-heroes find War Machine's behavior strange, they still follow him. The Mandarin tells Iron Man to prepare for oblivion until an emergency signal alerts him that a Stark Enterprise vehicle has docked. War Machine runs into the room and Hawkeye easily defeats the Mandarin and M.O.D.O.K. by firing an arrow of adamantium mesh.

Iron Man continues wrestling with War Machine, and Iron Man tells his super-hero team they have to get that the mind-controlling device of War Machine's neck. Hawkeye fires an arrow at War Machine, temporarily immobilizing him. Iron Man melts a part of War Machine's helmet and E.L.F. flies out. Century casts the miniature robot away and Hawkeye jettisons the satellite away on Iron Man's commands. Everybody climbs into a ship and escapes just before the station explodes. Century creates an asteroid storm around the Mandarin's ship to hold them off.

Retrieved from "https://marvel.fandom.com/wiki/Iron_Man:_The_Animated_Series_Season_1_3?oldid=5157910"
Community content is available under CC-BY-SA unless otherwise noted.