"Silence My Companion, Death My Destination" 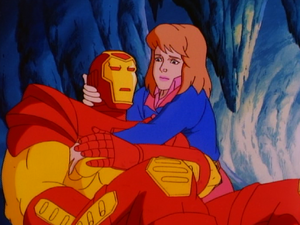 Even now, the self-replicating computer virus we planted on the Watchman tank prototype is contaminating its database, so that every one of them that comes off the assembly line on Friday will be a ticking bomb! When I give the signal, their tanks will destroy the very defenses they were designed to protect.

Appearing in "Silence My Companion, Death My Destination"

Synopsis for "Silence My Companion, Death My Destination"

General Amos Quirt shows up to a desert location, meeting Justin Hammer and James Rhodes. They both show General Quirt their tanks and test them to see which tank is the best. Stark Industries' Watchman wins against Hammer's Invincible Guardian. While riding back in his company limo, Justin Hammer then tells the Mandarin the results. The Mandarin had predicted the results and says the self-replicating virus they had planted on the Watchman tank prototype will contaminate its database all Watchman's into a bomb.

Tony Stark trains in his Iron Man suit in a terminal reality deep-space simulation and encounters Dreadknight. Iron Man attacks the foe and tells Julia Carpenter to stop the simulation when Dreadknight prepares to attack again. Tony blames the sunlight filter on his suit, blocking off all solar energy and depriving him of oxygen. As James and Julia help bring Tony out of the simulation room, a robotic Raven finishes hacking the simulation flies away to give information to MODOK.

Later, Tony, Julia, and Julia's daughter Rachel attend a piano concert for the Van Cliburn Foundation. Meanwhile, the animatronic Raven brings the information to MODOK and the Mandarin. They replay footage from the simulation and take note of the instance when Iron Man's battery pack fails.

At the Carpenter household the next day, Julia says goodbye to Rachel as she leaves for work. Julia gives Rachel a recording of Van Cliburn's concert before she goes to her piano lessons. Outside, Hypnotia waits for Rachel and transforms into her best friend Leslie. The disguised Hypnotia convinces Rachel to ditch her piano lessons and hang out with her at the new mall's video arcade. Rachel plays Armor Man vs. Genghis Khan, and finds she has to keep on playing to stop the game from shocking her.

Julia and Tony watch Rachel from a security camera, and Hammer tells them that they have to give him the plans for the Watchman's database in exchange for Rachel's safety. Hammer then covers the camera and asks the Mandarin why he needs the plans if they are already sabotaged. The Mandarin says it is actually bait to trap Iron Man.

Iron Man goes the Hammer Industries and detects Rachel's voice signature. Iron Man goes in through the roof and finds Rachel in a hologram projection of an arcade. The Mandarin announces that they just entered "Nightmare Alley." Spike walls start closing in, but Iron Man creates an exit and finds his battery power draining from lack of solar energy. A trap door almost leads Iron Man and Rachel to a fiery death, but Iron Man creates magnetic pulses to escape.

The Mandarin seizes the opportunity to transport Iron Man and Rachel to his cave. Iron Man realizes as Rachel sobs over him that he can use sound energy to power his suit. Rachel gives him to tape of Van Cliburn's piano music, and the music powers up Iron Man's armor.

With the Stark Industries' Watchman tanks ready, the Mandarin takes control of them to turn them into instruments of destruction. Iron Man flies in and fights the Mandarin's super-villain comrades. Whirlwind sucks the water tank dry and Blizzard creates a flying glacier which Iron Man breaks from the inside. Blacklash tries to capture Iron Man with his whip, but instead captures a high-voltage transformer disguised by a hologram as Iron Man. Blacklash retreats and Iron Man assures the police that Stark Industries will pay for all damages.

Retrieved from "https://marvel.fandom.com/wiki/Iron_Man:_The_Animated_Series_Season_1_4?oldid=5034356"
Community content is available under CC-BY-SA unless otherwise noted.