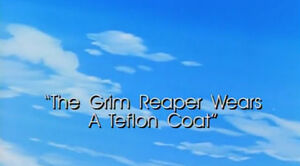 Appearing in "The Grim Reaper Wears a Teflon Coat"

Synopsis for "The Grim Reaper Wears a Teflon Coat"

Tony Stark holds a presentation to high-ranking military officers on Stark Industries' prototype fighter-bomber, showing what would happen if it fell into the wrong hands. He says the prototype is guarded by trusted employees. Later, Tony tells James Rhodes that the officers insisted on delivery and Wanda asks Tony for some time off.

The Mandarin's minions go to the Grim Reaper's secret hangar, and Grey Gargoyle turns the guards into statues. They all put on time-warp suits to sneak into the hangar in a different time field and steal the Reaper. In a court meeting, Justin Hammer accuses Tony of having "neither the ability nor the intention of delivering" the Reaper.

Tony shows Julia and Jim security tapes of the Reaper, which Julia says "they show the Reaper as if it hasn't been taken." M.O.D.O.K. pilots the first flight on the Reaper, but gets ejected once the jet detects an unauthorized pilot. The Mandarin orders Hammer to keep Stark busy so he does not have time to come after the Reaper. An angry mob harasses Tony, putting him back in therapy. Wanda returns, apologizing for leaving, and Tony soon realizes how the Mandarin's minions stole the Reaper.

Iron Man teams up with Spider-Woman, Scarlet Witch, Century, and Hawkeye to bring the Reaper home. Modok assures the Mandarin that he has conquered the Reaper's intruder rejection systems. The Mandarin plans to use the Reaper to destroy the Pentagon. Hawkeye and War Machine provide a diversion for the Mandarin's security minions. Iron Man and Spider-Woman find the Reaper and deliver it to the officers.

While flying home, Tony finds out that the three military officers they delivered the Reaper to are agents of Mandarin. The Mandarin pilots the Reaper, and boasts to his warriors before lifting off. Iron Man pursues the Reaper, but its defenses stop him until he flies on the warplane and uses his hydraulic-augmentation backpack to render it useless. Modok and the Mandarin reject as War Machine flies in to help Iron Man throw the warplane into the water.

Retrieved from "https://marvel.fandom.com/wiki/Iron_Man:_The_Animated_Series_Season_1_5?oldid=5157912"
Community content is available under CC-BY-SA unless otherwise noted.