"Enemy Within, Enemy Without" 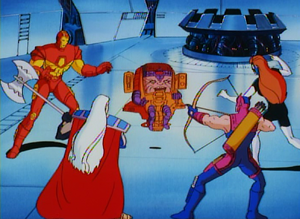 Episode Title
"Enemy Within, Enemy Without"

Appearing in "Enemy Within, Enemy Without"

Synopsis for "Enemy Within, Enemy Without"

James Rhodes and Wanda Maximoff ride in Stark Industries' new water strider. They encounter unidentified enemy warcraft ahead. James evades the warcraft's torpedoes and destroys all enemies. Tony calls them and congratulates James on completing the first part of the mission and heads to Emerald Cove, Sardinia to finish the second part.

At Emerald Cove, a photographer takes pictures of international supermodel Alana Ulanova in her bathing suit. A drill tank suddenly pops out of the ground and the Mandarin's warriors climb out and takes over the sea cove. When Whirlwind calls the Mandarin, Modok warns him against harming the world famous celebrities on the island to attract attention. The Mandarin decides to keep an eye on Modok to see where this sudden sympathy comes from.

Tony Stark and his team of super-heroes receive an alarm telling them that an intruder has entered the ammo dump in the arsenal compound. Iron Man and his team to find that the intruder is Modok, who claims sanctuary and offers to join them. Modok say he can provide important information, but Iron Man's team still does not trust him. Modok becomes enraged and wires himself to the system, and threatens to blow up the facility if they do not agree to his exchange. Back at the Emerald Cove, Alana sneaks away from her kidnappers.

Modok's threats to destroy the facility prove unyielding, as Iron Man had control of the fail-safe override the whole time. Iron Man explains that he had been testing Modok to see if he was serious, and decides to hear Modok out. Modok warns Iron Man that Emerald Cove is taken over and prepared to ambush James and Wanda. At Emerald Cove, Dreadknight recaptures Alana. Modok tells Iron Man that he wants them to save the captives because Alana is his wife.

Alana escapes her captors once again before James and Wanda approach sea cove. Blacklash tests the molecular compression force fields on a tank, which shrinks and retains its original mass. The Water Strider rides up on the beach and James Rhodes armors up in his War Machine suit. Blacklash uses the molecular compression force field on the Water Strider and the ship shrinks and grows to normal size.

The Mandarin's warriors notice Ulana has disconnected the force field and they try to recapture her. Scarlet Witch fights to protect the supermodel by stopping Whirlwind. Iron Man sends the Grey Gargoyle down a pit and Hawkeye deals with the rest. The Mandarin uses his rings to send Iron Man crashing onto the Water Strider and prepares to finish off Iron Man. However, Iron Man uses two panels from the boat to reflect the Mandarin's attack. The Mandarin and his forces retreat.

Retrieved from "https://marvel.fandom.com/wiki/Iron_Man:_The_Animated_Series_Season_1_6?oldid=4752934"
Community content is available under CC-BY-SA unless otherwise noted.