"The Defection of Hawkeye" 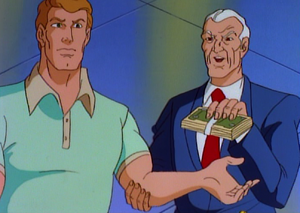 Episode Title
"The Defection of Hawkeye"

We all want to believe you, Clint, but actions speak louder than words, your own actions. When the Mandarin constructed a duplicate Iron Man to start a plague, it was up to you to stop him. You cut it real close, but in the end, you did. Over and over again, when the going got tough, we looked around and there you weren't. But you always did seem to arrive at the last instant, if you showed up at all.

Appearing in "The Defection of Hawkeye"

Synopsis for "The Defection of Hawkeye"

The Mandarin plans on seizing Stark Industries' overland tanker's cargo of adamantium alloy. Tony Stark and Julia Carpenter stay a half mile behind the tanker in a vehicle, anticipating the hijack. James Rhodes, Wanda Maximoff, and Century stand by at Stark Industries, preparing to alert Tony. Blizzard creates and ice obstacle for the tanker, driving the robot driver out of control.

The Mandarin uses his Sky Saucer to siphon off the adamantium alloy. Tony gets the warning signal and tells the vehicle to armor up and it flies toward the tanker. Iron Man also armors up, but Dreadknight knocks him down with a saw blade. Spider-Woman fights Blizzard and Whirlwind from inside the flying car. War Machine catches Iron Man and they get the alloy. The team notices their need for Hawkeye in the battle, although Tony is sure he has an explanation.

The Mandarin finds Iron Man has set him up with a false alloy that renders his robots useless. He decides to use Hawkeye's absence against the team. Tony's team analyzes the Mandarin's attacks and finds the whole operation very well prepared. James suggests they have a mole as part of their group. When Clinton Barton arrives, he refuses to tell them where he was during the fight, saying "My business is my business."

Julia rides in Tony's vehicle using a disguise to follow Clint. The Mandarin monitors the Julia and deduces that she must be following Hawkeye. Clint ends up in Hammer Hills and loses Julia. There Clint rescues a woman in a pool who says she can not swim, who turns out to be Hypnotia.

Tony and his team of super-heroes prepare for the next shipment of adamantium alloy at midnight. Modok sticks magnetic homing devices on the overland tanker to find its secret route. The Mandarin uses his rings to make a bulldozer grab the tanker, which Iron Man stops before it reaches the ocean. Back at Stark Industries, Iron Man and his team interrogate Hawkeye about selling them out. They conclude that he is not a mole, but that the Mandarin has a way of tracking the lander.

The Mandarin's warriors attack the facility from all sides. The Mandarin plans on stealing Iron Man's armor, but Iron Man stops him by setting up a protective shield. Later, Clinton reveals that he had missed the action the previous day because he had been taking care of his sick grandfather, Jackson Wiley.

Retrieved from "https://marvel.fandom.com/wiki/Iron_Man:_The_Animated_Series_Season_1_8?oldid=5521662"
Community content is available under CC-BY-SA unless otherwise noted.