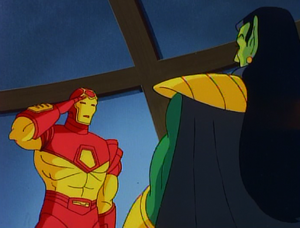 Appearing in "Iron Man to the Second Power" Part 1

Synopsis for "Iron Man to the Second Power" Part 1

MODOK tests destructor robots to see if they can reduce a skeletal creature robot to ashes. The skeletal robot melts the destructors, and MODOK declares the test a success and tells the Mandarin. MODOK covers the skeletal structure with a metal skin to make it look like Iron Man. The Mandarin notices some inaccuracies in the armor, and MODOK arranges to get the required data from the original Iron Man.

MODOK accesses a security bug he had planted in Stark's assembly line, and uses it to reprogram the assembly line robots to wreak havoc. Iron Man flies in and destroys the security bug. The reprogrammed robot grabs hold of Iron Man and MODOK tries to acquire the information needed to finish Iron Man the Second. Unfortunately, Iron Man escapes before MODOK can copy Iron Man's right shoulder, so MODOK duplicates the right shoulder design to make the left.

The Mandarin plans on using the Iron Man duplicate while the real Iron Man strives to save Stark Industries from bankruptcy. Meanwhile, Dreadknight, Blacklash, and Blizzard terrorize a Peruvian farming village. Hypnotia secures the farmers using hypnotism. She informs the Mandarin, who then sends Iron Man the Second. The duplicate first steals the antidote to Dark Water Fever in Hammer's Biotech complex.

The Mandarin's warriors make the farmers spray their crops with the Dark Water fungus. The duplicate Iron Man flies to Stark's communications satellite to broadcast that he has the only supply of Dark Water Fever to the world. He asks for one million dollars before midnight, or he will depopulate the Earth with the Dark Water Fever strain. He then releases a strain over Los Angeles to prove it is not an idle threat.

Retrieved from "https://marvel.fandom.com/wiki/Iron_Man:_The_Animated_Series_Season_1_9?oldid=5520962"
Community content is available under CC-BY-SA unless otherwise noted.