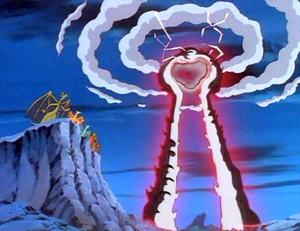 Episode Title
"The Beast Within"

Every team needs a leader. But leaders lead, and don't do what you did.

Appearing in "The Beast Within"

Synopsis for "The Beast Within"

When Tony Stark tries put open his car, the car explodes and he blames Hammer. Justin Hammer anticipates Iron Man's arrival, saying "Strike at a master and its dog will attack." Iron Man evades four missiles, but Hammer still manages to catch him. Hypnotia tells Justin Hammer that the Mandarin only wants the front torso piece of the armor, but Iron Man reverses the polar field to escape before they can take it.

Tony Stark talks with Agent Nick Fury about the attacks. Agent Fury gives him a snapshot, taken from a satellite, of four people trekking in a hidden valley in China. Iron Man looks closer at the photo and finds Fin Fang Foom's shadow. He asks his computer, H.O.M.E.R. to cross-check the profiles of four missing captains of industry and finds they resemble men from about a century ago.

Tony travels to China, and notices Hypnotia and Blizzard on a motorboat. They send a sea gull to place an explosive device on Tony's jet. War Machine goes underwater to rescue Iron Man and only finds his helmet. In China, Fin Fang Foom introduces the Mandarin to his four "human" brothers. The Mandarin frees the four dragons from their human bonds in exchange for their servitude.

Stark's team mourn the "death" of Tony Stark. War Machine decides to confront Hammer over the issue while the rest of his team takes care of security. Justin tells War Machine that the Mandarin wanted him to destroy Iron Man to get his armor for "something important in China."

In China, the Mandarin restores the four men back into their original dragon forms. All five dragons open the floodgates to their home world, Kakaranthara, to make Earth fall under the rule of the dragons. War Machine fights against the dragons until they capture him, and Iron Man flies in and saves him.

Iron Man and the Mandarin form a temporary alliance to join powers and destroy the portal to Kakaranthara. Tony later explains that he faked his death to put his team out of danger. They tell Tony that they have decided to end their alliance to Iron Man. James and Julia decide to stay with Tony.

Retrieved from "https://marvel.fandom.com/wiki/Iron_Man:_The_Animated_Series_Season_2_1?oldid=3815145"
Community content is available under CC-BY-SA unless otherwise noted.