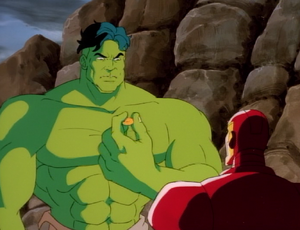 Oh, yes, a time long ago when that G-Bomb so drastically changed two lives. Mine, and especially yours, young Bruce Banner. However, my plans for future conquest now demand that I strike you down, then stand in your stead as the gamma rays bestow the Hulk's strength upon me, not you!

Iron Man, Julia Carpenter, and James Rhodes examine a light beam phenomena in the desert with a ranger. The light beams trap Dr. Bruce Banner on a ledge and start making anything they touch disappear, including Julia. Iron Man searches for the source of the light and finds one of the Mandarin's rings. Dr. Bruce Banner says the ring could send everything the light beam touches through rifts in time.

The Leader, who has another one of the Mandarin's rings, sends in his alien forces to retrieve the other ring. Iron Man fights them off, but fails to save the ring. While riding in a helicopter, Dr. Banner explains that they are up against his former lab assistant Samuel Sterns who accidentally got exposed to massive doses to gamma rays, transforming him into an insane genius who calls himself the Leader.

In his secret lair, the Leader uses the two rings to create a doorway to the past. He aims to kill the young Bruce Banner before the fateful G-Bomb test that turned him into the Hulk so the Leader can become the Hulk instead. However, an intruder alert postpones him from shooting so he can take care of the helicopter carrying Iron Man and his team. Dr. Banner turns into the Hulk to stop the Leader.

Hulk takes the ring and tries to crush it since the Leader said it would destroy him. Iron Man tries to stop him, but the ring sends them back to the time of the dinosaurs. James Rhodes tells the Leader to get them back using the other ring, and the Leader agrees as long as he gets both rings in return for rescuing Iron Man.

Using a portal, James gives Iron Man his large armor to fight the Hulk and the Leader also jumps through. While Iron Man and the Hulk fight, Julia recovers the ring and the Leader soon takes it from her at gunpoint. The Leader targets the young Bruce Banner, but the Hulk decides to protect him so he can become the Hulk. James fixes the portal and manages to bring back everyone except the Leader. The Mandarin soon recovers his two rings from an archaeological dig.

Retrieved from "https://marvel.fandom.com/wiki/Iron_Man:_The_Animated_Series_Season_2_11?oldid=3624226"
Community content is available under CC-BY-SA unless otherwise noted.