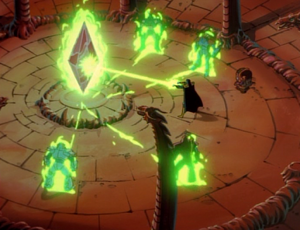 Like the great Genghis Khan, who once purged Asia of corrupting influences, I will solve our crisis by eliminating any and all technology from this endangered planet. My price? Simply that the nations of the world hand the unequivocal reins of power over to me!

Appearing in "Hands of the Mandarin" (Part 1)

Synopsis for "Hands of the Mandarin" (Part 1)

The Mandarin breaks into a Security Council meeting and tells them he will solve their crisis by eliminated all technology in exchange for all the power in the four nations of the world. The council rejects the Mandarin's offer, and the Mandarin promises that he will rein his new world in "glorious darkness."

Tony Stark flies to New York City in his jet and finds all communications are completely down. A mist descends upon the whole island of Manhattan, causing a large-scale power outage. Iron Man tries flying in with his hydro-armor, but the mist makes him lose power and crash. Julia and HOMER decide to call in the rest of Force Works to save Tony.

First, War Machine gets Hawkeye, who glides into the city and picks up Iron Man. However, the glider loses air on the second take off and starts falling rapidly. In his secret lair, the Mandarin uses his rings to recharge the Heart of Darkness, causing the mists in New York. He says the mists will eventually cover the entire earth to get rid of all mechanically and electronically based technology. The Mandarin tells MODOK that the Heart must be fed living power.

The Mandarin's minions wreak havoc in Hong Kong in their new exo-armor. Iron Man reassembles Force Works to fight them off. They bind and gag all of the Mandarin's minions and Century learns from Hypnotia about the Heart of Darkness crystal. Iron Man finds the crystal protected by MODOK. The Mandarin charges up the crystal, knocking out Iron Man's armor systems and takes of his helmet to find out his secret identity as Tony Stark. The Mandarin uses Iron Man's voice to lead Force Works into his hideout.

Retrieved from "https://marvel.fandom.com/wiki/Iron_Man:_The_Animated_Series_Season_2_12?oldid=5227460"
Community content is available under CC-BY-SA unless otherwise noted.