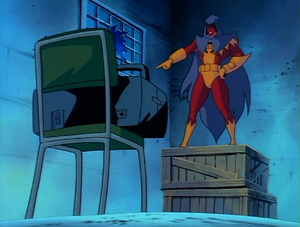 This corrupt world will listen to us! Our bold actions tonight will force them to. I will not be ignored. Millions depend on our courage. The people's exploitation by the rich is a great tyranny, and worst among many tyrants is Tony Stark! Go now, brothers and sisters! We have much to prepare before midnight. History will honor our great triumph.

Appearing in "Fire and Rain"

Synopsis for "Fire and Rain"

War Machine flies into a simulated attack sequence to show military personnel. An explosion in the power plant causes the security system, Goliath, to go into emergency defense mode and attack War Machine and knock him into the ocean. Iron Man flies in to save War Machine from drowning after evading a missile. While underwater, War Machine has a flashback of the time when he failed to save a boy named Joey from drowning.

While Tony and Julia help James recover, a super-villain calling himself Firebrand says he caused the power outage and demands ten million dollars to stop more chaos. At an old abandoned building Firebrand speaks at a "rally" which turns out to be a recording of people cheering. Iron Man inspects the power plants and another explosion goes off nearby.

Firebrand then targets Stark Enterprises, causing a few small fires and disabling the sprinklers. Tony links Firebrand with former Stark Industries' employee and the now dead Simon Gilbert. Tony requires the time when Simon tried to destroy the company for firing him but only destroyed himself. Tony says Simon did leave a son, which he deduces must be Firebrand.

Iron Man meets Firebrand at the Rockson Refinery at midnight, and stops him from "plung[ing] the city into an irreversible maelstrom of chaos." Firebrand goes to the city dam for his back-up plan and blows it up. Iron Man tries to save Firebrand from being swept away by the current, but his suit fails to adapt to the water and he gets swept away too.

War Machine flies in and hesitates to go into the water, remembering his previous encounter, but still manages to save Iron Man and Firebrand. Iron Man and War Machine work together to stop the flood waters from reaching the city. James Rhodes tells Tony that he will not wear the War Machine armor because he nearly bailed on Iron Man. Meanwhile in the desert, the Mandarin steals back one of his rings from a merchant.

Retrieved from "https://marvel.fandom.com/wiki/Iron_Man:_The_Animated_Series_Season_2_2?oldid=3624218"
Community content is available under CC-BY-SA unless otherwise noted.