"Iron Man, on the Inside" 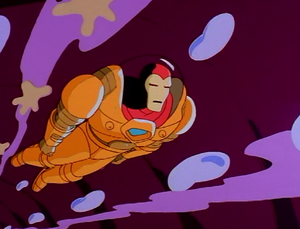 Episode Title
"Iron Man, on the Inside"

Mr. Hawkeye has suffered extreme neurological damage to the lumbar region of his spine. There is a 99% chance of total paralysis, and a 73% chance of death.

Appearing in "Iron Man, on the Inside"

Synopsis for "Iron Man, on the Inside"

Tony Stark stays up late working on a molecular expander to increase the food supply, and Julia Carpenter tells him that they will leave for the Detroit Computer Conference in half an hour. While on their way to the Stark jet, Tony and Julia meet Clinton Barton, who tells them he has come back to clean out his locker.

Just before taking off, Ultimo grabs the jet and Tony changes into Iron Man. Julia breaks the jet free from Ultimo's grasp but loses control of the jet's rudder hydraulics. Iron Man battles Ultimo and Hawkeye soon joins in to save Iron Man. Julia bails out of the jet and Iron Man saves her before the jet crashes into a control tower. However, a piece of debris falls on Hawkeye.

Inside, H.O.M.E.R. helps Tony run a medical scan on Hawkeye and find he has suffered potentially deadly damage to the spine. Tony says a newly developed neuro-chip from Stark Enterprises could stop paralysis, but HOMER remind Tony that there is no known medical technique for reaching the affected area of Hawkeye's spine. Outside, Ultimo finds the terminal for HOMER in the jet debris, giving the Hacker access to all of Stark's supercomputers.

Iron Man decides to perform the dangerous surgery by shrinking himself. HOMER tells Iron Man that he has two hours to perform the neuro-chip surgery before he returns to normal size. Although HOMER starts acting strangely, Iron Man successfully reduces himself and enters Clinton's bloodstream with the chip and travels through the heart and liver.

The Hacker commands HOMER to shut down Stark Enterprises' security systems and tells Ultimo to move in. Julia finds out about HOMER's virus and tries to remove it with an anti-virus program. HOMER then tells Julia that Iron Man has nine minutes instead of two hours because of a "teensy error." Julia tells Iron Man to get out, but Iron Man says he has gone too close to stop and implants the chip into the spine.

Ultimo, shrunk to the same size as Iron Man, joins the super-hero in Clinton's bloodstream and the two start battling. Iron Man throws Ultimo onto Clinton's adrenal gland and shocks it to knock out Ultimo. With only two minutes left to get out, Iron Man carries Ultimo to Clinton's lung and tells Julia to get pepper to make him sneeze them out.

Iron Man and Ultimo return to their original sizes and Julia and Hawkeye battle Ultimo. HOMER says he has located the source of the hacker, so Iron Man and Hawkeye go to his house and asks him why he did it. The Hacker says that he does not like Stark Industries because they would not accept his applications for work in their computer science division because he was too young and the police quickly arrest the hacker. Meanwhile, the Mandarin bids for one of his rings at an auction. When he loses, he takes the ring from the highest bidder.

Retrieved from "https://marvel.fandom.com/wiki/Iron_Man:_The_Animated_Series_Season_2_6?oldid=4961592"
Community content is available under CC-BY-SA unless otherwise noted.