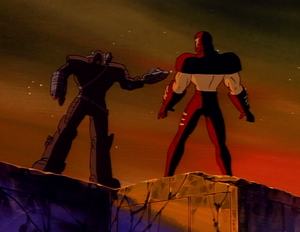 Finally, I am complete. With this sickle, I shall harvest the greatness of my country, my mother Russia. I shall rid her of the corrupt nouveau riche, who keep babushkas hobbling in the streets, begging for rubles. Ah, but the luster of power is tarnished. Dark Aegis has destroyed a planet, and for no gain. At what price is my glory? Can I still follow his orders with honor?

Tony Stark and HOMER test how changing the mode of Iron Man's armor depletes the energy core. James Rhodes drops by to tell them that an unidentified falling object is heading toward Malibu. Iron Man flies up to stop the object, but his power core reaches dangerously low level and all armor systems shut down.

James flies into the scene on a helicopter and stops the ship from crash landing and saves Iron Man. Tony and Julia enter the deserted spacecraft and find a hologram message from Jessik, the monarch of the planet Elysian. The message asks for Iron Man's assistance in fighting an armored invader, Dark Aegis.

HOMER examines the ship's travel records and tells Tony that it will return to Elysian in two hours. Iron Man and War Machine prepare for take-off, but Julia tells them that the ship carries 1,270 pounds of unaccounted weight in the cargo bay. She urges them to abort mission, but the launch still goes ahead as planned.

The ship travels through a space-fold to quickly reach the planet Elysian. Before going outside, Iron Man and War Machine examine the cargo bay and find Titanium Man, who captures War Machine and throws him into the vacuum of space toward the sun. Iron Man saves War Machine by sling-shooting around the sun and toward Elysian.

They find the planet in ruins apparently caused by nuclear explosions. Iron Man tells War Machine to find the space fold module on the ship. Iron Man runs into Dark Aegis, who offers Iron Man to rule side-by-side. Dark Aegis uses his Oracle Blast to destroy a moon and tells Iron Man to do the same thing with another moon.

War Machine struggles for breath and suspends all nonessential systems to fortify life support. Unfortunately, he runs into Titanium Man, who arms his weapons at War Machine. Titanium Man stops once he sees Dark Aegis destroy another moon, crying "Enough!" Dark Aegis offers Iron Man an Oracle weapon so they can both destroy the binary suns. Iron Man refuses to comply and Dark Aegis quickly turns against him.

Retrieved from "https://marvel.fandom.com/wiki/Iron_Man:_The_Animated_Series_Season_2_7?oldid=5023786"
Community content is available under CC-BY-SA unless otherwise noted.