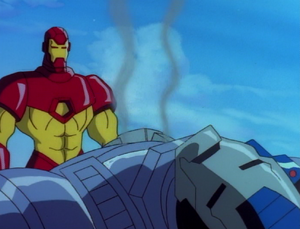 I couldn't handle the guilt of knowing that my inventions were being misused, causing people pain. Because the last thing I ever wanted was to cause pain. Especially to those I really care about. Who've stuck by me when no one else would.

Appearing in "The Armor Wars" Part 2

Synopsis for "The Armor Wars" Part 2

Justin Hammer announces that he has put all of Hammer Corporations' resources at the government's disposal. He introduces Firepower, a robot built to destroy Iron Man. Tony goes to disable the machine and figures out that Hammer must have sold his technology to his enemies. Iron Man attaches a negator pack to Firepower, but Justin has already found a way to neutralize their effects. Iron Man flies in for another attack, but this time a missile attacks him and blows up his armor.

While Julia mourns for Iron Man, Tony calls her saying he is all right and that only his armor got blown up with remote control. Later, Justin orders Firepower to destroy Stark Enterprises. Tony works on making a bigger Iron Man suit and once again battle with Firepower. Firepower aims a neutron bomb at the future site of Stark Towers, and Iron Man disables the bomb. Meanwhile, the Mandarin steals back his seventh ring.

Retrieved from "https://marvel.fandom.com/wiki/Iron_Man:_The_Animated_Series_Season_2_9?oldid=3739779"
Community content is available under CC-BY-SA unless otherwise noted.