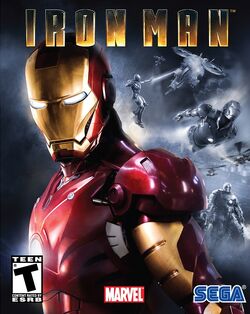 During a trip to Afghanistan to demonstrate his company's new weapon system, Tony Stark was attacked and kidnapped by a terrorist group called the Ten Rings.

Stark escaped with the help of fellow captive Yinsen, the two used the materials around them to build a suit of armor, which he used to escape from captivity. After his escape, he would later be picked up by the U.S. Air Force in the desert. Upon returning to the United States, Stark declared that Stark Industries would no longer manufacture weapons, a move which his business partner and second-in-command CEO Obadiah Stane informed him was blocked by the board members shortly after.

With the help of his personal artificial intelligence, J.A.R.V.I.S., Stark tinkered with the design of his power suit, refining it for flight capability, and built a more powerful and reliable arc reactor, both to power his pacemaker and power his suit. Meanwhile, Reza, the leader of the Ten Rings terrorist group, dispatched his men to recover the Mark 1 Armor from the desert where Stark had abandoned it. After finding the Armor, Reza ordered his men to rebuild it again.

While testing his new suit, Tony is informed by his assistant Pepper Potts that armed men are attacking the facilities. Stark then decides to use his suit to deal with the attackers and notices that they are Maggia soldiers. After the attack, Stark discovers that Maggia is providing weapons for the Ten Rings, and he returns to Afghanistan to battle them. Using his new Mark III "Iron Man" armor, Stark destroys Maggia's weapons stockpiles and an armored hovercraft.

On his way home. Iron Man accidentally drew the attention of two patrolling jet pilots of the United States Air Force. After a supersonic dogfight between Stark and two F-22s, one jet was damaged in Stark's attempt to hide, forcing the pilot to eject. The pilot's ejection seat malfunctioned, but Stark managed to save the pilot's life. After this ordeal, Stark revealed his Iron Man identity to Rhodes and Rhodes, in turn, covered it up by stating that the incident was "a training exercise."

Tony then returned home, where Pepper Potts discovered what he was doing with himself all alone. Rhodes then starts to help Stark with his desires, informing him of a weapons transport in Afghanistan.

Stark follows the transport, destroying the weapons, defeating the villain Blacklash, a former Stark Industries worker, in the process, before proceeding to Maggia's compound to destroy the rest of the weapons, and after infiltrating the mansion he confronts Madame Masque, who was killed when a wall falls on her. Stark then discovers Maggia's last weapon: a heavily armed flying fortress. Iron Man then attacks the fortress and destroys it, ending Maggia's evil once and for all.

While Stark was confronting Maggia, his corrupt business partner, Obadiah Stane, secretly recovered the first Iron Man armor in Afghanistan and started working with the company Advanced Idea Mechanics (A.I.M.) to create a power source. After Rhodes informs him that A.I.M. has attacked a nuclear facility in Russia, Stark decides to confront them, also because A.I.M. was Stark Industries top buyers before he stopped manufacturing weapons. Iron Man ends the nuclear energy robbery and detects a strong radiation signal underground. After following this signal, Stark is confronted by Boris Bullski, who created a titanium armor similar to that of Iron Man, thus becoming the "Titanium Man". However, Stark is able to defeat Bullski and then returns to the United States. Rhodes then informs him that A.I.M. has attacked a military ship in the Arctic, and Stark once again prevents them from stealing nuclear energy, as well as defeating the Controller.

Tony sends Pepper to hack the Industries computer and find the shipping records, so he can track down the illicit shipments and destroy them. However, the facilities are attacked by A.I.M. forces under the command of Titanium Man, who was actually sent by Obadiah Stane to steal the Iron Man suit. After discovering Stane's involvement with A.I.M. and the Ten Rings, Stark once again defeats Bullski.

Tony then returns to his workshop, where he is ambushed by Stane, who steals his arc reactor to create a power source for his own armor. Stark is rescued by Rhodey and is informed by him that A.I.M. kidnapped Pepper to use her as bait. He then uses his armor to save Pepper from an A.I.M. facility and prevents the explosion of their reactor. Stark then decides that A.I.M. is a bigger menace than Stane, and decides to confront them first. He heads to their island and destroys their proton cannon, and later confronts and defeats the Melter. Iron Man then destroys a space tether, ending the A.I.M. menace.

Stark then returns to the United States and contacts Obadiah Stane, discovering that he kidnapped Pepper Potts. Just before Iron Monger could kill Pepper, Iron Man intervened and fought him out onto the streets. Their epic battle soon took them to the skies where Iron Man seemingly defeated Iron Monger when Stane's armor iced up at high altitude. Both combatants then fell, each managing to re-engage critical systems to slow their descent and land atop the Stark Industries building. Iron Monger proceeded to beat Iron Man, but in a last ditch effort, Stark ordered Pepper to overload the large arc reactor powering the building. The resulting blast killed Obadiah and incapacitated Tony.

Iron Man is a 2008 video game based on the film of the same name as well as the classic iterations of the character.[2] It was released on May 2, 2008, to coincide with the release of the film in cinemas. Published by Sega, and released on PlayStation 3, Xbox 360 (developed by Secret Level), PlayStation 2, PlayStation Portable, Nintendo DS, Wii, PC (developed by Artificial Mind and Movement) and Mobile Platforms. Robert Downey Jr., Terrence Howard, and Shaun Toub reprise their roles from the film.[3]

The enemies are Advanced Idea Mechanics, the Maggia and the Ten Rings terrorist group. The super villains in the game includes Blacklash, Controller, Titanium Man, Melter, and Iron Monger.[4]

Like this? Let us know!
Retrieved from "https://marvel.fandom.com/wiki/Iron_Man_(video_game)?oldid=5520750"
Community content is available under CC-BY-SA unless otherwise noted.