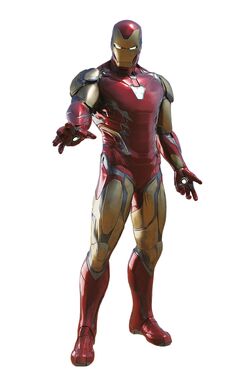 Tony Stark started designing the eighty-fifth and final Iron Man Armor sometime following the traumatizing events of the Avengers' battle against Thanos. It represented a further exploration of Tony's use of nanotechnology for the creation of his suits. As he did for the Mark L, he attached a removable arc reactor in his chest, where the suit's nanites were stored.

Tony suited up in the MK LXXXV when he traveled back in time to the Battle of New York with Steve Rogers, Hulk and Scott Lang in order to steal the Time, Mind, and Space Infinity Stones. He used it when he jumped off the penthouse of Stark Tower so he could fly over New York. He used the armor again in order to break into a secure vault in 1970 at Camp Lehigh, and again back in the present while the Avengers assembled their own Infinity Gauntlet.

They were interrupted, however, when Thanos attacked the Avengers Compound. Tony wore the MK LXXXV into battle and fought among the Avengers' ranks, including the revived Avengers who had been killed in the Decimation, such as Doctor Strange, Black Panther, and Spider-Man, along with some newer faces, like Carol Danvers and his own wife Pepper wearing the armor he made for her.

It was also while wearing this armor that Tony made the ultimate sacrifice, fighting Thanos to a bitter standstill until Thanos managed to get his hands on the Avengers' gauntlet. Tony was faster, however, and unbeknownst to Thanos, stole the Infinity Stones off the gauntlet and used his nanotech to integrate them into his own armor as a makeshift gauntlet. It was then that he snapped his fingers and won the fight, though losing his own life in the process.[1]

The Iron Man Armor MK LXXXV continues the trend of using nanotechnology in the armors which Tony started with the MK L; instead of segmented and synergistic hard metal components, the suit is composed of an array of nanobots which can encase its user and materialize into a fully-functional armor in a matter of seconds. Unlike the Mark L, however, this armor did not fully form around its user with nanobots; it instead formed into various articulated components which would in turn click together as the rest of the suit formed. This nanobot composition made it possible for Stark to vary the hardness and flexibility of the armor's material at will, in turn allowing him to redistribute the suit's components and shapeshift MK LXXXV into a variety of tools and weapons. When the armor is not in use, its nanobots remain stored in a reservoir in Tony's chest. Like prior models, this armor is powered by an arc reactor. The suit features F.R.I.D.A.Y.'s assistance to operate.[1]

The armor possesses the default offensive capabilities of a regular Iron Man armor, namely increased strength, repulsor rays and unibeam. The strength enhancement allowed Stark to knock out and kill powerful foes like Chitauri soldiers with only a punch. He could reshape the suit's limbs into various types of repulser-powered guns to add to his array of weaponry. Stark additionally was capable of frequently releasing high-power blasts from the repulser on his chest, seemingly without draining as much energy as those kinds of attacks have in the past.

In addition to making use of the suit's hand flight stabilizers to fire repulsor blasts and rays, Iron Man could turn the suit's gauntlets into repulsor gatling guns, and materialize repulsor cannons of varying size and shape that could either form around his arm or take up an entire gauntlet. He could additionally deploy an array of focusers on his back which could be charged up with lightning from Thor's Stormbreaker or Mjolnir and then discharge an intensely powerful blast of energy. The armor comes equipped with an array of micro-missiles that are fired from the back, either individually or all at once, as well as micro-munitions. Like the MK L, this armor is capable of manifesting some of the more unorthodox weapons from Tony's arsenal, such as energy blades and knives. Perhaps the most powerful offensive capability of the armor, however, is its ability to sustain, at least temporarily, the power of all six Infinity Stones, as well as wield them in battle, though this damaged the suit and ultimately killed its wearer.[1]

In addition to the typical protection provided by an Iron Man armor, which allowed Stark to resist hits from Chitauri soldiers, Cull Obsidian, and Thanos, and being crushed the Avengers Compound, the MK LXXXV could regenerate destroyed parts in an instant a limited number of times. The suit can also be used to form shields capable of withstanding an energy discharge from the combined power of the Infinity Stones, though unlike the practical shields created using the MK L, this armor was capable of creating holographic shields which could accomplish the same goal without using up nanites.[1]

Retrieved from "https://marvel.fandom.com/wiki/Iron_Man_Armor_MK_LXXXV_(Earth-199999)?oldid=6083551"
Community content is available under CC-BY-SA unless otherwise noted.