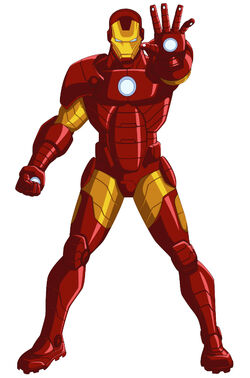 The 50th suit of armor developed by Tony Stark. It was first deployed when Iron Man's MK XLIX armor was stolen from him by M.O.D.O.K. for the Red Skull.[1]

While its design is similar to the Mark XLIX, its energy input it's far greater.

The armor's weaponry includes repulsors, unibeam, and missiles. It comes equipped with a Head-Up Display and an on-board A.I. J.A.R.V.I.S. for monitoring, targeting, and scanning purposes.[1]

In this reality, created by the Squadron Supreme when they used the Reality Stone, Iron Man and the rest of the Avengers were turned into villains. Iron Man's armor was colored black and gold. It was destroyed when Iron Man sacrificed himself to save the Avengers from Nighthawk.[2]

Like this? Let us know!
Retrieved from "https://marvel.fandom.com/wiki/Iron_Man_Armor_MK_L_(Earth-12041)?oldid=6436830"
Community content is available under CC-BY-SA unless otherwise noted.