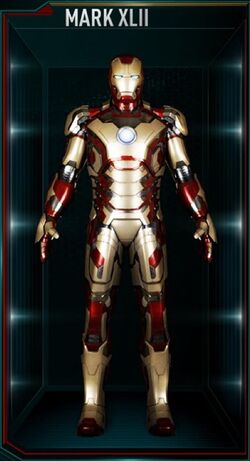 Described as the "badass new baby brother," the XLII saw little action time compared to its 'brothers', mainly because it was still in the prototype stage.

Initial tests of the suit were rather chaotic, as Tony had to find the appropriate speed at which the different parts of the body had to travel in order to prevent injury when they assembled on him. Later, while he was creating new technologies in his workshop, Tony tested the suit's ability to be remotely controlled.

During his sleep, Tony was having nightmares, and subconsciously summoned the Mark XLII, which awakened and terrified Pepper.

After Stark publicly threatened the Mandarin following the near-death experience of his friend Happy Hogan during one of the terrorist's attacks, Stark used the MK XLII to guard his Malibu Mansion in case he was attacked. When his residence was in fact under attack by armed helicopters, he commanded this suit to assemble on Pepper Potts in order to protect her until she could get to safety. As soon as Potts was outside the collapsing mansion, Tony recalled it to fight the helicopters, but the suit had numerous system failures which prevented him from flying or launching missiles. He managed to dispatch two of the three helicopters, but found himself trapped on the sea floor by debris from his crumbling mansion. J.A.R.V.I.S. detached the suit's right gauntlet to free Tony, and after recombining, the suit, with Tony unconscious inside, burst from sea and proceeded to the next location in Tony's flight plan: Tennessee.

The flight was interrupted when the armor ran out of power; Tony still reached Tennessee, but crashed in a forest. He got himself and the armor to a suburban shed, where he met a young boy named Harley. Harley helped with acquiring a few sundry items needed to get the functional again, and aided further while Stark made his way to Miami.

Stark was caught confronting Trevor Slattery, an actor who had portrayed the Mandarin, and imprisoned in a mansion. He summoned the MK XLII, but only one gauntlet and a combined leg assembly appeared, as the rest of the suit was blocked from departing Harley's garage by a locked door. He fought guards for time some with only the two pieces present, and it wasn't until he got the entire suit assembled that he saw one of Killian's men, Savin, flying away from the mansion in the Iron Patriot Armor taken from Jim Rhodes. Low on power, the MK XLII was unable to affect a pursuit however, and Tony resorted to resuming charging it with a car battery found on the property.

Once Tony and Rhodes had uncovered Aldrich Killian's plan to use the Iron Patriot as a Trojan horse to enter Air Force One and kidnap President Ellis, he and Rhodes set off to foil the plan. Tony used the telepresence feature of the Mark XLII in an attempt to protect the president aboard Air Force One, but found that President Ellis had already been taken and that Eric Savin was still on board. Tony fought the man, and ultimately killed him with the suit's uni-beam, but the subsequent break-up of the aircraft saw thirteen survivors of Savin's attack sucked out and plummeting to the ground. Stark was able to use the suit to save all thirteen, but the Mark XLII came through the rescue in pieces after he accidentally piloted it into the path of a truck.

Stark and Rhodes meanwhile continued their race to a Miami dock where they hoped to stop Killian. During the ensuing battle, the MK XLII responded to the call to gather all remaining Iron Man suits, and finally came to Stark late in the battle when he was fighting Killian. The suit approached Stark in order to suit him up, but collided and fell apart. Stark ensnared his enemy in the collected pieces and triggered the suit's self-destruct, leaving little left of it but a heavily ravaged helmet.[1]

The MK XLII was later rebuilt, and remained in storage at the Avengers Tower. When Stark finished moving to the New Avengers Facility in Upstate New York, the suit was was one of the many objects and devices left for the final step of the relocation process. Adrian Toomes attempted to hijack the jet that was carrying these items, but Spider-Man's intervention prevented him from making off with it or its items, though the airplane crash landed into Coney Island in the process.[2]

The MK XLII is comprised of separate pieces, apparently with individual battery units, that can fly to a designated humanoid target and form a suit around such a body. It is controlled from state-of-art chips implanted in Stark's left forearm, allowing him to mentally direct the pieces. Stark commonly uses hand gestures to help guide the modules, although the fully formed suit has also been commanded by Stark's subconscious during REM sleep.

When the pieces latch onto a target body, the solid plates extend articulated pieces that reach out to latch with the adjoining component piece; for example a rerebrace and gauntlet will jointly create the elbow connection between them. This gives the Iron Man Mark XLII a level of adaptability previously not seen in an Iron Man suit, and could form around a slim female form with no loss of articulation.

The fifteen modular pieces that comprise the Mark XLII are:

MK XLII features common weaponry for Iron Man, including repulsor rays, unibeam, flash grenades, and an array of missiles with a targeting system run by J.A.R.V.I.S. A Head-Up Display includes the A.I.'s monitoring capabilities and observational protocol, a Global Positioning System, target scanning, and displays for navigation, power level, and vital signs. The modular power systems ensure that the MK XLII is adaptable, and yet the lack of a constant tie to a central arc reactor also leaves it more vulnerable to power loss than many previous Iron Man suits.[1]

Like this? Let us know!
Retrieved from "https://marvel.fandom.com/wiki/Iron_Man_Armor_MK_XLII_(Earth-199999)?oldid=6436855"
Community content is available under CC-BY-SA unless otherwise noted.