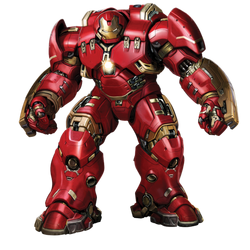 The Mark XLIV Armor (also known as Hulkbuster) is a heavy-duty exoskeleton add-on to the Mark XLIII, designed for confrontations with Bruce Banner's alter ego, the Hulk. Banner himself helped Tony Stark with the armor, which was planned as a "last resort" to control the Hulk.

When the Hulk went on a rampage in South Africa after Banner was psychologically attacked by Wanda Maximoff, Tony was forced to put "Veronica" into action as all other Avengers were either disabled or otherwise occupied. Deployed from a Stark Enterprises satellite in orbit, the re-entry vehicle deployed pieces of the MK XLIV which in turn assembled around Tony's armor. After a drawn-out battle, Tony knocked out the Hulk by tackling him into a skyscraper under construction, and followed up the attack with a hard punch.[1]

Modular Technology: The Hulkbuster suit is deployed from an orbital drop pod called Veronica, that uses its own repulsor thruster to hover in the near vicinity of a commanding Iron Man suit. Veronica then deploys various modules as required, and has spare modules to replace any that are damaged beyond effectiveness. Using independent propulsion systems, each module can fly to the user and assemble into a complete Hulkbuster suit. The inner Iron Man suit is contained entirely within the torso of the Hulkbuster, allowing for the Hulkbuster's limbs to be jettisoned and replaced without harming the wearer. Replacement limb modules are available for different roles, including oversized arms for conventional manipulation, a pile driver arm for high impact battering, and an arm that can open and trap an enemy's arm inside it.

Enhanced Strength: The suit was designed to match the incredible strength of the Hulk, being powered by over eleven arc reactors in order to grant the strength required. The suit has enough strength to knock the Hulk about two streets away with one punch.

Enhanced Durability: The armor was built to be much stronger than any previous suits, and to withstand extreme impact damage.

Flight: The Hulkbuster is equipped with repulsors that allow it to fly.

Repulsor Beams: The armor has the ability to shoot repulsor beams strong enough to hold down Hulk.

Like this? Let us know!
Retrieved from "https://marvel.fandom.com/wiki/Iron_Man_Armor_MK_XLIV_(Earth-199999)?oldid=6431909"
Community content is available under CC-BY-SA unless otherwise noted.